Oh man, I can’t remember if you wrote this before or after the dog thing, but this is at least a tiny bit relevant to me as well.

You see, I have a dog. Everybody loves her. She’s adorable. 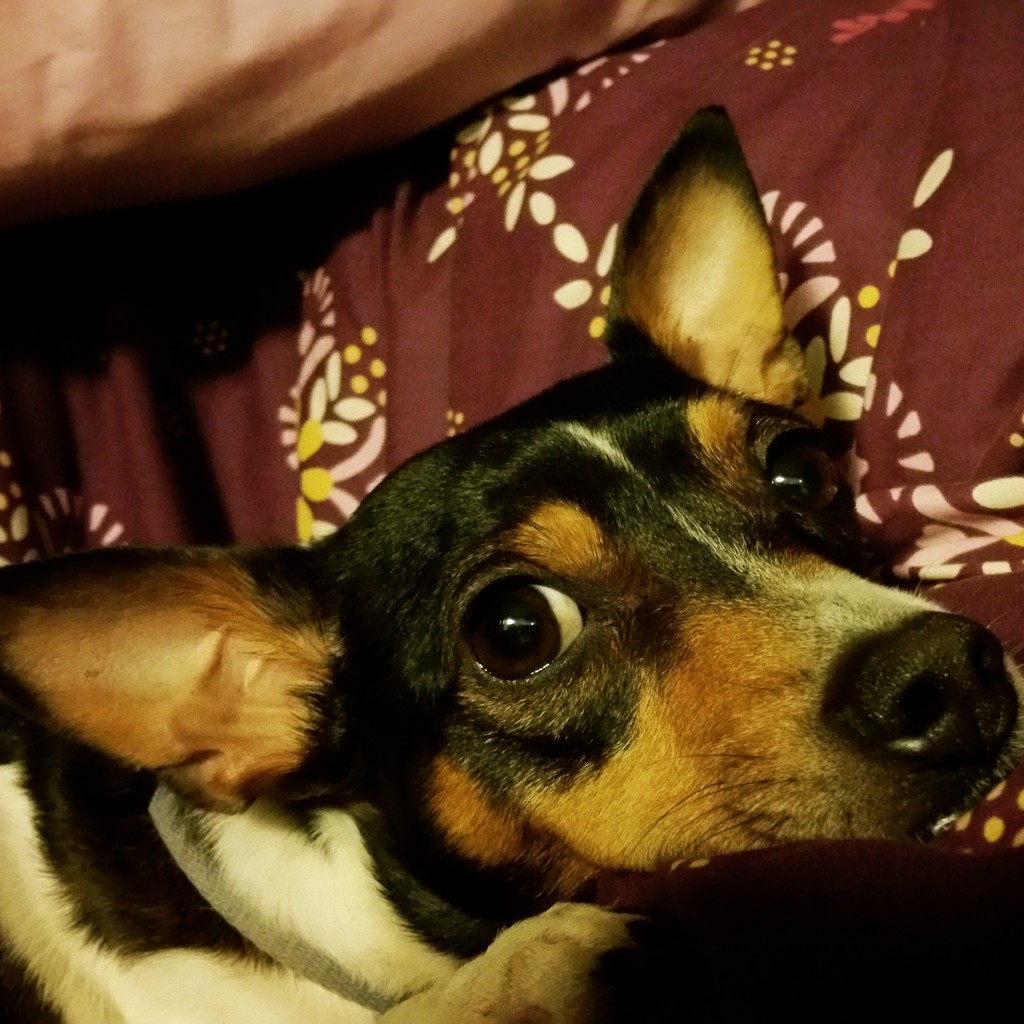 But what they don’t know is that we try to walk this beast an average of 5 miles a day. Her high-strung but ultimately docile nature is dependent on this exercise. We can fudge it and take it down to 2, but that can’t last for long.

Bully for us business has been awesome, and the rain has been intense for the last week or so, which means that our amazing dog has been walked approximately 2 miles in total. In the last week. Which is really uncool, and why we kind of deserve her keeping us awake all night being a complete shithead.

It’s not like we didn’t know this was coming. But that didn’t stop me from cussing her out, contemplating dog-icide, and gently but firmly wrapping her in a blanket burrito that it took her a full half an hour to struggle out of.

I’m not good with being woken up. It tends to make me upset. My mom wasn’t cool with it either. When we were first trying to do the mom/daughter experiment where I stayed with her for weekends sometimes, I had to sleep in her bed because… I’m not sure why. I feel like she had a perfectly good couch, but for some reason I was nine years old and sleeping in my mom’s bed on the weekend because my life wasn’t awful enough already.

Of course my lifelong insomnia kicked in, and suddenly all the little things I did to occupy myself in my habitual wakefulness (singing, tapping, fidgeting, whistling, etc.) were able to disturb someone else, and she was fucking pissed.

If you’ve spent your entire childhood tapping on the wall when you’re half awake and bored, being told to stop once, or even five times, is not going to make that happen. I still do that today if I’m wrecked enough. Ben has to tell me I’m doing it, I don’t even notice. So, my mom reacted in the way that I would come to think of as typical, in that she spent what seemed like several hours screaming, hitting things, throwing things, and being crazy because I spent several minutes quietly tapping on the drywall. I squished myself behind her bed, and then under it in order to get away from her. Then she expected me to lay back down with her and go to sleep.

I can fool myself into thinking I’m regular most of the time, but nights like the other night, I am reminded that I have absolutely no ability to deal with certain aspects of parenting because, when the stress level is super-high I have no role models for how to behave. I’ve read books, and I have good mothers in my life that I can look to for examples, but I’ve never directly experienced a situation where a parent was frustrated with a child and didn’t take that out on them. I can think of what it must be like, but I can’t know until I have the chance to be that parent.

It sometimes strikes me as hilarious that my mother was also afraid of turning into her mother. Where my grandmother was stoic, my mother was hysterical, were my grandma had mild neglect, my mom had total abandonment, and when grandma was passive, mom was aggressive to the point of violence. I don’t want to be so terrified of my own mom that I create a completely different set of problems on the other side of the spectrum.

I work very hard to be my own person, but at the end of the day, I am my mother’s daughter. More and more I hear her voice coming out of my mouth. More and more I see her in myself in a thousand tiny ways, but most of them are good.

My mother was extremely creative, and she could be very loving. My father has always talked to me like my opinions mattered, and treated me like I was capable of anything. My grandmother is practical and funny, and smart. Even my terrible grandfather was a hard worker and a problem solver. When I think about how I want my family to look going forward, it’s important to me to remember how it looked going backward. It wasn’t all bad.

For whatever reason, I am so much more stable than my parents were, which means that I have the ability to build something this family hasn’t seen in a long time, maybe not ever.

The older I get, the more I think, not of the daughter that missed out on parents, but the parents that missed out on a daughter. We have an opportunity to make the family that our parents didn’t get. Could they have made different choices, and had different outcomes so that we ourselves could have been treated well in the first place? Yes. But now we’re the ones with the choices to make, and it’s important to make them for the future, not because of the past.