Saturday we visited Crafted at the Port of LA to see if we could pick up some last minute Christmas gifts before we head up to Oregon on Tuesday. I’d been hearing ads for them on my local NPR station for months now, but I honestly didn’t know what to expect. Based on the fact that they could buy air time on a radio station, even public radio made me think this was probably a major entrepreneurial undertaking, but the idea of organizing handmade crafters into a successful commercial venture intrigued me.

I was kind of hoping it would be like the Grand Central Market downtown, but with hand crafts. On the subject of Grand Central Market, I really have to take a field trip there now that I have this blog. My dad used to take me when I was a kid and I thought it was a magical place. I wonder how I would see it with adult eyes. 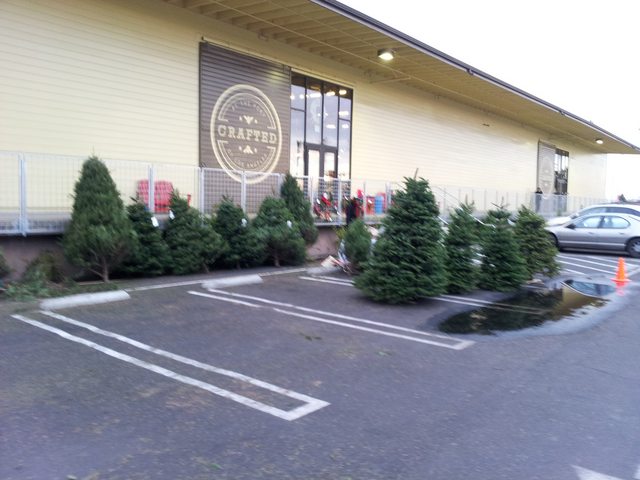 Anyway, the market itself is totally inside the port in a massive WWII era warehouse that has been converted into a hipster paradise. Thankfully, despite the decor and Boba ni Taco truck parked outside, the atmosphere was decidedly unpretentious and welcoming while still being interesting and fun. Although, part of the mellowness might be because we arrived later, with less than two hours left before closing time. We ate lunch at the truck, which was wise, because there was no other hot food inside. There was a macaroon stall, and a beer station, but as far as I could tell, that was the extent of the edibles available once past the door. The verdict on Boba ni Taco is that they are decidedly above average, and their prices are decent. Unlike the expensive ‘gourmet’ trucks that lurk around my office on Wilshire, this was an honest old taco truck at heart, delivering simple food quickly and with skill. I especially recommend their hot almond milk tea. Maybe refrain from eating it at the same time as chow mein, because it’s really sweet, but if you’re a fan of almond, this is a hit. 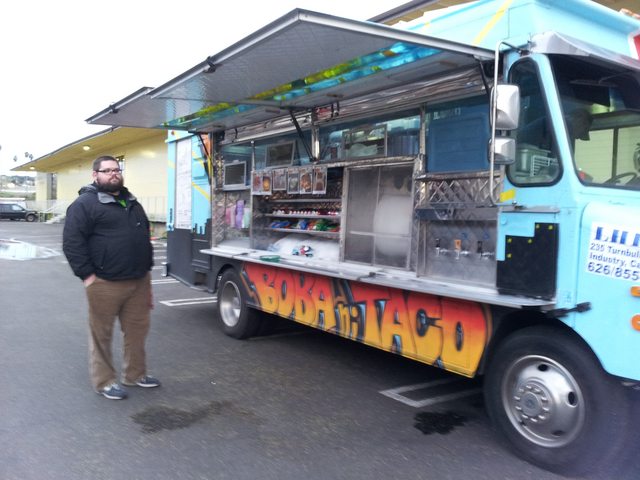 As we walked in past a fundraiser/Christmas tree sale (with really cheap trees if you ask me), a DJ was spinning by the door. Believe me when I say that I usually hate the obligatory DJ spinning by the door situation that almost every popular spot in this city has right now. But unlike every other DJ, who’s repetitive house/trance has to be screamed over, this guy had a laid back hip hop and jazz thing going that worked well in the space, didn’t inhibit conversation, and chilled me out as I wandered through the stalls. The Crafted site has him listed as Frank Foreal, but I seem to remember him looking a little different, so it may have been a different guy, or Frank may be in need of some new publicity shots. Either way, I appreciate your subtly, sir.

I think because we came so late in the day, but it might also be because it’s already Hanukkah and getting close to Christmas, there weren’t a lot of people there and about 20% of the vendors were closed with large “CRAFTED” banners covering their stalls. But the people who were left were a really cool cross section of the crafting community that included fiber art, jewelry, wood working, horticulture and some food stuff too. The people we ended up talking to the most were the girl manning the De La Luna Designs both (I don’t think she was designer Virginia Ayala), the folks at Red Car Market, which is a local food collective. They even had some stuff made in Altadena, my home town. We also talked with Lisa of Oxford Accessories, who shares a booth with Dogwood & Poppy. She was making these really cute slouch beanies that she sold in mason jars. She told us we looked like we were made to be a couple. We decided not to tell her it’s from 9 years of the same eating, sleeping and exercising (or not exercising in our case) as each other, and instead told her about our secret twins who follow us around. (This is real. Well, mostly real). Maybe I’ll tell you about them tomorrow. 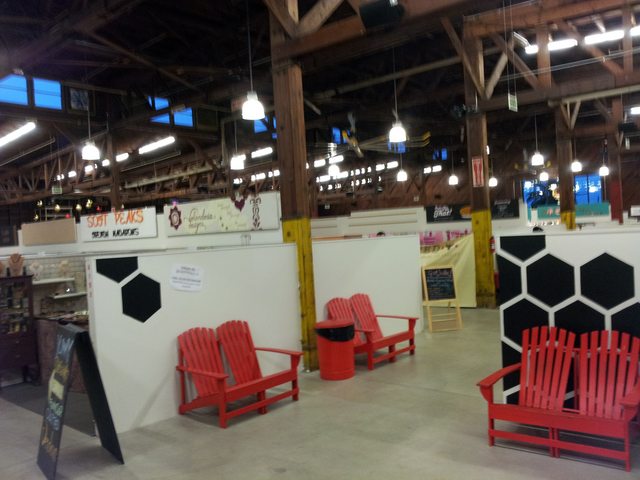 As far as pricing at the goes, there really was a wide range, frequently in the same shop. One artist, I want to say it was Ann Olsen Daub had a bucket of old keys for $.25 each mere feet away from some amazing necklaces selling in the hundreds of dollars (with good reason). The variety of styles was massive as well. I can honestly say, we could probably bring every friend we have and they would all find a booth they liked.

According to the Crafted site, what we saw today is just the first phase of their ultimate plan, which will be unrolled in three month stages, 100 venders at a time. They’re counting on a 1.2 billion dollar revitalization effort by the Port and the City to generate shopping traffic for their final form: two warehouses filled with 250 vendor stalls each connected by a courtyard in between them.

Vendors pay $500 a month in rent, but as many as 5 can share a single stall with what’s called a Curated Stall Agreement (I have a feeling that’s what Red Car Market is), and not just anybody can get in. There’s a vender application with sections to fill in your store’s flickr, facebook, etsy, and website URLs so that your merchandise can be appraised. Leases are 6 months, and there’s a $500 deposit on the space. Depending on the price range of your crafts, or the willingness of your crafty friends to share a commitment, it might be a sound decision for someone who’s already on the craft fair circuit, or pulling steady income from etsy. Also, it did feel like the different vendors had become friends, which is a nice experience if you haven’t been privy to fair solidarity before.

Even as I’m daunted by the idea of 500 separate handcraft vendors occupying the same space for at least 6 months at a time (think of the drama!) I love the intention of Crafted. I find myself wanting them to succeed, and succeed well. If this doesn’t work out, it won’t be for lack of gumption or cheekiness on their part. They’re definitely doing everything right from my point of view.

3 Replies to “Crafted at the Port of LA”