I was minding my own damn business, walking my sweet, adorable dog, you guys know Pepper, but in case you don’t, here’s a refresher: 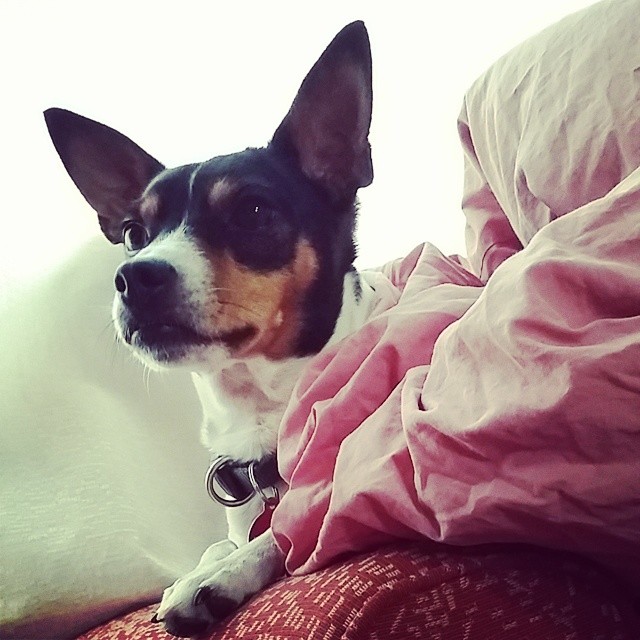 I happened to be walking her through the nice side of my neighborhood, which, I’ll admit was my first mistake. But, it’s a super beautiful walk, and people are usually so pleasant. I’ve been walking her there for six months and never had anything so much as a weird feeling on that walk. Until today.

Like all responsible pet owners, I pick up Peppers shit in little plastic bags, that I am then forced to carry around with me until I can find a friendly trash can. Today, I was in just this predicament when I came across a bin someone left in the street. I was overjoyed, and causally popped the little shit bag into the can.

Then I heard a frantic knocking, and realized that a middle-aged woman was knocking on the window of the house who’s can I’d just used. She then opened the window and demanded that I take my dog’s poo out of her trash. If the trash had been full, and the poo on the top of the bin, I actually would have reached in and gotten it, but the bin was nearly empty and the shit bag had fallen between some old salad and something else I didn’t want to look too closely at.

“I’m not going through your trash. I’m sorry, I won’t do it again.” I said

“You are going to take that poop out of my trash! YOU CAN’T JUST PUT THINGS IN OTHER PEOPLE’S TRASH CANS!” She yelled.

I decided to agree to disagree, and started walking away. She ran out the front door onto the lawn. She was wearing a salmon colored sweater set and holding her hands out in front of her like claws. I continued to walk away.

She picked up the trash and upended it, spilled garbage all over the street in front of her own house. When I looked back, she was on all fours searching for my poop bag, which she then flung at me with extreme prejudice. It flew about 20 feet, but by that time I was at least 200 feet away, and I felt it was probably a good idea to keep walking.

I assumed it was over at that point. I was already thinking of how I’d blog about this crazy lady throwing her own trash around when I heard screaming behind me. At first, I thought she must have taken off at a dead run and caught up with me, but when I looked over, I realized she was driving her SUV next to me, pacing me so she could scream out the open window.

I remember feeling kind of impressed by her dedication. She was looking straight at me, and her ponytail kept flopping all over the place while she was yelling. Then, while the car was still rolling along next to me, she took out an iPhone in an adorable little frog case and held it straight out in front of her with both hands.

“I’m filming you.” She said

“I’m filming you and I’m going to report you for littering.” She said.

“I don’t know what you’re talking about,” I said. “Leave me alone!”

Later, I asked the police officer if it would be considered littering for me to put my dog’s poo in her trash. He said that no, technically what I did was illegal dumping since I used a service (city trash) that they pay for, and I told him I’d gladly kick this poor destitute woman down a dollar or two to pay for the use of her trash.

I mean, if I can’t afford to be generous, who can?

He also said that since she was the one throwing trash on the ground that she’d be the litterer.

At the time, I didn’t know this information, but I wasn’t entirely sure what her next move was going to be so I called 911.

Did you know that Portland 911 makes you say “It’s an emergency!” into their automated answering service before they’ll connect you to an operator? They also give you the option of saying it in Spanish. “Esta es una emergencia.”

As soon as she realized that I was on the phone with the 911 operator, she sped away down the street. I decided to wait for the cops to come, just to make sure I reported it. On the one hand, everybody has bad days, but not everybody decides to throw trash and chase down fellow adults with our cars, which is kind of nightmare behavior.

I didn’t get to ask for her name, and of course I didn’t remember her address, so the only identifying factor I was able to give the officer was her black, late-model Mitsubishi Outlander, and her salon-style blond highlights. Unlike her, I have no photographic evidence of my escapade.

So, scary trash thrower. If you’re reading this, could you send me the YouTube link? I feel like it’s important to document the fact that people in million dollar houses can be miserable, low-rent skanks just as easily as people from the ghetto.

And, if you were wondering, Officer Fred* said that, despite my technically being a dumper, he felt like more Portlanders should pick up their dog shit.

Ben, on the other hand, has always felt uncomfortable with me putting my dog’s shit in random trash cans (only the ones on the street, I’d never go in someone’s yard), might have indicated that I brought this on myself. Although he did at least conced that her reaction was uncalled for.

Personally, I have no problem with people putting their trash in my trash can. I’d rather it go in a trash than on the street. It would never have occurred to me that somebody could have those kind of possessive feelings about their waste.

I do think it’s funny that in the span of 6 months, I’ve had my car vandalized and trash thrown at me, when I spent 5 years in Hawthorne and literally nothing happened to me or anything I actually own. Ben’s car got vandalized twice, and yeah, there were shootings and stuff, but I was fine. I told this to Officer Fred*, and he was unamused. He did give us a ride home, though, so that was very nice.

*Name changed to protect the innocent.

Editor’s Note: Some people have pointed out that it was not my trash can. Having never had a sense of ownership over trash cans, it honestly didn’t occurr to me that anybody else would mind me putting trash in their can. I assure you, I have been disabused of that notion, I’ve seen the error of my ways, I will not be throwing trash in anything but my own or public cans from now on. But seriously, people who feel so strongly about their trash that they have a screaming, chasing people fit over it should maybe think about taking up a hobby. I’m not saying this out of spite, but for your own mental health. Calm the fuck down, it’s just trash.

7 Replies to “Come to Portland, Get Trash Thrown at You”