So this year has been bad for money, and it just got worse. As in I was recently sitting in the lobby of the service center watching the last cent of my savings go straight to the good people at Honda. Not like they don’t deserve it. What the Fit takes in maintenance costs, it saves three times over in never, ever breaking down and having consistently unreal gas mileage. I love my car, it’s number 4 on the list of things I’ll empty my bank account for.

And, if we’re being honest, I didn’t actually spend all my savings at Honda. I have $70 left. Also, A League of Their Own was playing in the lobby and I may or may not have started to get misty when the ugly one has to say goodbye to her dad, and he’s telling her what a great daughter she is and she has to go out into the world and experience things because she’s amazing and staying at home with him will only hold her back. And my favorite tech may or may not have seen me clutching the quote for 4 new tires with tears in my eyes, and I may or may not have saved $300 by purchasing my tires down the street at a shop I had on the very highest recommendation I could hope for. Not like I could have afforded to buy my tires at the dealership anyway (Like I said, I have $70 left) but it makes me feel really good that the place I went is considered worthwhile by industry insiders, if you know what I mean.

I couldn’t find that scene, so here’s everybody’s favorite

And as much as it seems like it, I’m not really in that bad a place. I already bought or made everybody’s gifts before the car got serviced, so that’s taken care of, and with my bonus at work I’ll be back at my savings minimum by the end of February. I’m by no means as poor as I have been in previous years, but I’m uncomfortable. If anything else goes wrong, I’ll be relying on credit and the kindness of strangers. Two things I like to avoid at all costs. In fact, I don’t even own a credit card, which is probably one of the reasons I have the best rating of any 20-something I know.

On top of this no money situation, I’m stressing out over the fact that we’re driving to Oregon this year, something we’ve never done in the winter. I can hardly believe that a week from the day this publishes, we’ll be on the road. There’s so much to pack and clean and finish before we leave. I just found out we’re doing secret Santa gifts at work after I already spent, like $50 to make everybody individual candy gift bags. I thought I was done with the work holiday obligation, but now I have to spend another $20 on somebody I know basically nothing about. We’re also having a holiday bake-off the day before we leave, and you better believe I’m getting in on that. Holiday bake-off is the only time of year I actually bake anything, and every single time it completely chills me out and I think to myself “I should do this more often” and then I get too busy and forget to bake until the next holiday bake off. It basically forces me to relax in the middle of my most stressful time of the year

And of course I’m still worried that Ben’s parents will figure out I’m deplorable, and that I’ll ruin Christmas and end up crying alone in a rain storm or something – this has happened to me, on Christmas, so don’t act like it’s not a possibility. Maybe I’ll tell you that story tomorrow. Anyway, can you tell I’m recovering from my cold? Because now I can spend all my energy on freaking out about the holidays.

I had a friend to used to tell me “Christmas is just another cold day” whenever I’d call crying that I had no money, or that no one loved me, or that I was stuck in a rain storm. And it kind of helped me to freak out less. The only reason this day has significance is because we give it significance. Christmas can be as big or as small as we make it in our own families, and in our own lives. You don’t even have to do anything. I know I kind of just anxiety attacked all over this blog post, but when I think of the holiday in the context, it’s not such a big deal after all. One day doesn’t make or break a man. It’s all the days that come before and after that, it’s how he deals with them one by one. 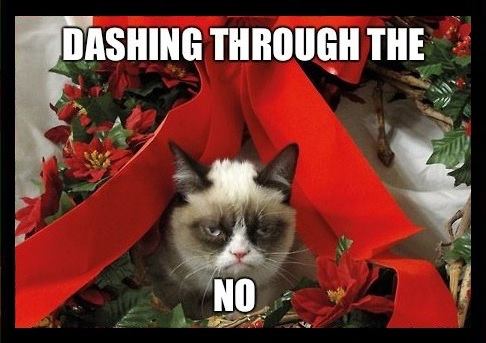 One Reply to “Christmas is Just Another Cold Day”