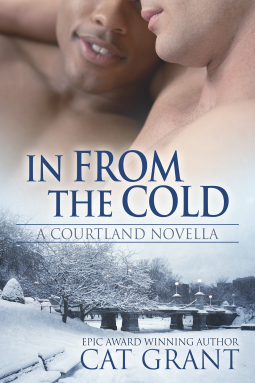 In From the Cold by Cat Grant

Thanks to NetGalley and Cat Grant for the review copy.

In from the Cold is the long awaited next-installment of the Courtland Chronicles, a massive series that I admit I only read the first book of many years ago. At the time, I knew it was the first in a series, and I realized that book one was foreshadowing a lot of dramatic breaking up and getting back together, so I felt it was good to jump ship before things got too serious between us.

This book concerns the next generation in the chronicles, as the main character Seth is the son of the first thruple from the original books. One of Seth’s dads makes an appearance, but mostly the book deals with Seth and the object of his affection, Bilal.

This is an extremely quick read at approximately 91 pages, Grant takes just enough time to introduce the characters and start them on the path of future bliss. Seth is rich, cute, sexually experienced, and completely ignorant to his own privilege. Bilal is a Muslim from Iran, where being gay is a crime punishable by death. Some promising conflicts start to surface, but there’s really no opportunity for anything more than a glimpse of future books.

Having read and reviewed one other Cat Grant book in the past (Black Dog), I feel like the (bad) character driven drama that chased me away from the first Courtland book may be a thing of the past. There’s maybe even a little bit of an author-insert speech about not being cruel to your first love by making bad decisions that hurt them. I certainly look forward to seeing more from these characters.

Minus one star for being more of a teaser than an actual story. But it is only $2.99, which is nice.