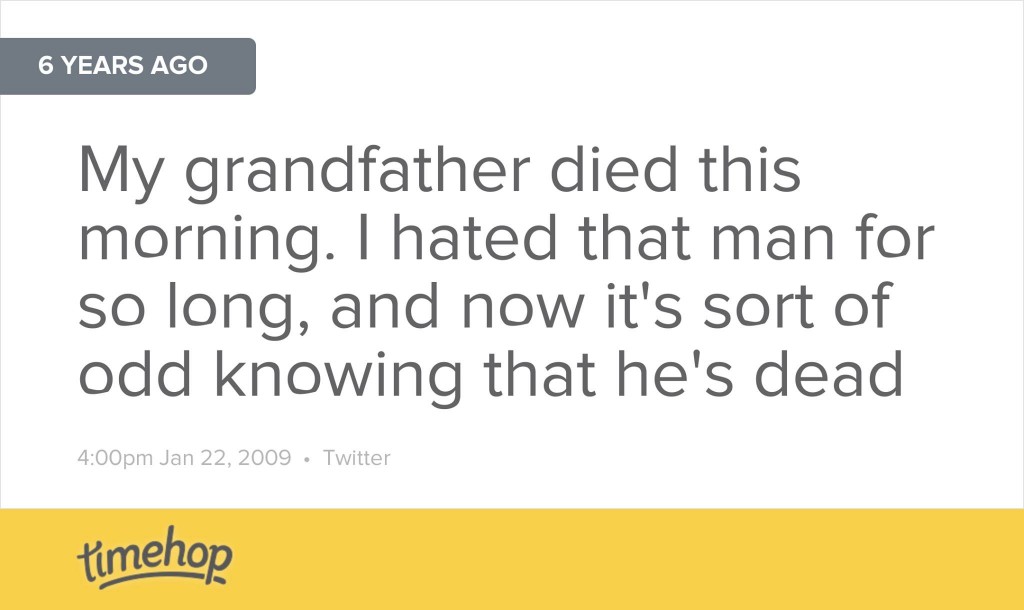 People told me that I should make up with the grandfather that beat me when I was a kid.

“You’ll regret it when he’s dead.”

“You might hate him now, but when he’s gone you’ll remember all the things he did for you and you’ll be sorry you never apologized to him.”

Nope. I’m still glad his ass is dead, and I don’t give a shit about the fact that I never “made up” with him. There was nothing to make up about. It’s not like we had an argument over some petty bullshit. He beat the crap out of me, I hated him for it, I don’t feel like I owed him anything, he certainly didn’t feel any obligation to me either. I was glad when he died, and I’m still glad he’s dead now.

It’s okay to hate someone who treated you like shit. It’s okay to be glad when they’re dead.

I have no shame over anything I did in regard to him. Not even when he told my grandma that the nurses in his nursing home were hitting him and I told her he was probably lying. I hope they were hitting him.

I understand the cycle of abuse. I’m not so cruel that I don’t have compassion for a man who was beat in his childhood far more frequently and far more badly than he ever beat me, but there’s compassion and there’s consequences, and they are very different things. My grandmother doesn’t need the guilt he was trying to heap on her for not taking his diseased, incontinent ass home to die while she cleaned him and took even more of his cruel, abusive behavior.

He was an asshole and a bully his entire life. He made no changes, and so he died alone. A cautionary tale, for sure. But definitely none of my concern otherwise.

All the people who told me I’d be sorry when he was gone… it’s been six years, I still don’t see any sorrow over here.