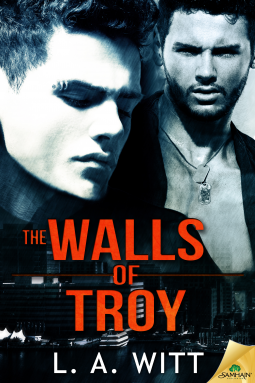 The Walls of Troy
L. A. Witt

Thanks to Netgalley and Samhain Publishing for the review copy.

You guys know I love me some L.A. Witt. She can take a story that might seem dull in another writers hands: mature, career oriented body guard falls for his younger, and saucier charge, and make it a cover to cover compelling read.

Navy cop Iskander Ayhan takes his first bodyguard assignment as yet another step in a military career ladder he desperately wants to climb, but he can’t see how guarding an admiral’s 22 year old son is anything but a joke. The only reason he can think of for the “need” for a body guard would have to do with political grand-standing, something Iskander sees as an all too common waste of taxpayer dollars. But when he gets to his post, it’s anything but grandstanding. If only Troy Dalton would be honest about the very real danger is in.

Troy has a secret, but the chances of him opening up to Iskander are slim to none. That is, until the sparks flying between them prove to me more than just skin deep. Can he trust his new body guard on the basis of their shared sexuality alone? Either way, he’ll have to trust someone. Before it’s too late for both of them.

Like I said, L.A. is the reason to read this book. Her inherent skill in storytelling and pacing take this out of the regular, everyday gay romance for me. The fact that nearly every novel she writes is a new and interesting journey is also a plus. It’s not the story, which is fairly run of the mill, but the way in which it’s told that make the difference between an okay book and a really good one. As usual, this is a good one.