This morning I read the BuzzFeed article that reposted this video from the conservative blog campusreform.org.

And I can’t help but think this was released by a conservative group, to prove what, exactly? That Dan Savage is right?

As a mature, educated, reasonable human being, I should be able to look at both sides of every argument and at least feel some compassion for where they’re coming from, but this is despicable. Of course you want gay kids to kill themselves if you’re enough of a homophobe to run a fucking anti-gay hate group! Of course every suicide is a victory for you, if your goal is eradicating gayness!

My good friend Big Ben says that liberals all have our heads up our asses, that by practicing cultural relativism and acting like we could just have a decent conversation with the opposition we were essentially letting the wolf in. And when I see shit about the Family Research Counsel acting so righteously innocent in the face of this very pointed criticism, I start to wonder if he’s right. Apropos of nothing, campus reform even references the incident earlier this year when “[t]he FRC… was attacked by a lone gunman who was also a volunteer at the local LGBT center.” A security guard was shot in the arm, but no one was killed.

It reminds me of this infographic that showed up on the front page of the Athiesm subreddit this morning. 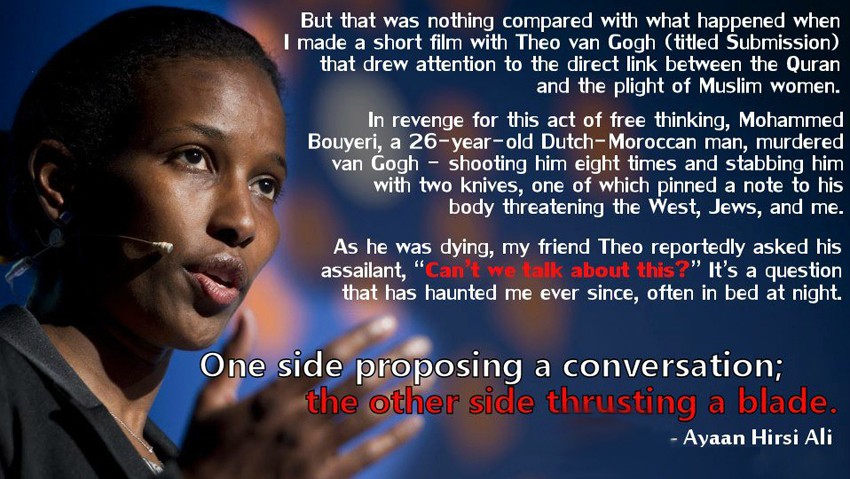 I was unable to find the original source for the quote, but Ali has said basically the same thing in other interviews, so I feel confident in posting it.

So here we have the despicable hate group FRC, crying wolf at the local GLBT center. And here we have Theo Van Gogh, a man murdered for speaking out against Islam, who’s last words were “can’t we talk about this?”

Since I am a liberal, I come to these two statements from my own place of bias. Because my parents weren’t prejudiced against queer people, that particular affliction seems silly to me. Because my parents were prejudiced against religious people, that seems totally reasonable to me. I am likely to think to myself that, while attacking the Family Research Council with a gun is despicable, I can see how a man at the end of his rope, past the point of insanity, might see in his feverish brain the solution being violence. Violence against an organization that spent so much time directly threatening him and his. If I had been born to different parents, in different circumstances, my feelings would probably be different. My opinion, however, is mine to form.

Both sides are setting themselves up as victims, trying extremely hard to be the innocent ones, the pitiful ones. Each paints themselves as good-hearted minorities, just fighting as hard as they possibly can for their own rights and the rights of their people. And yet, both of their muzzles drip with blood.

Tony Perkins is an easy one for me. He hate gays, encourage parents of queer children to abandon them, and equates homosexuality with pedophilia. Fuck that guy. But Theo Van Gogh was no saint either. He was a champion of free speech, yes. But unlike our American hero Larry Flint, he used hatred, not smut, to make his points. Among other things, he referred to women as “little speaking cunts,” and suggested that Jews are such pervs they were all fucking each other, even in the gas chamber (source, and source)

Am I trying to justify this guy getting stabbed? I don’t know, maybe. But now that you know he was such a fucker, it fills out the picture that’s been painted of him as this innocent little Dutchman whimpering “can’t we talk about this?” while a crazy, mean Arab stands over him with a knife and watches him die, doesn’t it? Just like Tony Perkins, the man was a bully, and just like The Family Research Council, when the shit hit the fan, his team was eager to portray him as the most innocent of victims.

Tony Perkins and Theo Van Gogh both stooped to very low depths with the things they’ve said. These men have used name calling, false claims, and the glorification and celebration of violence to their own, bigoted ends. If you run around talking the talk, is it any wonder when somebody comes by who walks the walk? And are they really so oppressed when there was no governmental outcry against them, no real threat from any legitimate organization? They are members of a protected class in their respective societies who were attacked (with varying degrees of success) by insane individuals who claimed no allegiance to any group.

They are not, as they would like to be thought of, hard working regular guys just trying to make the world a better place. Depending on where you’re standing, you might see that in them, or you might not. I personally, do not. Tony Perkins, Theo Van Gogh, and other publicity hungry blow-hards are the real ‘them’ in this ‘us against them’ equation.

I want to talk about this (within reason, sometimes there just isn’t a common ground on some issues), so when I hear that Van Gogh, and man who seems to share some beliefs with me, was cut down while trying to converse with his attacker, it gets me quite riled up. I personally, am not a Christian, nor am I prejudiced against gays, so I feel no compassion when the FRC security guard thanks everybody for their prayers. But this identification is false. Theo Van Gogh was a racist and a bigot, the same as Tony Perkins is a homophobe and a bigot. They are more alike each other than I am like them at all. And a reasonable Christian, even one who’s just a little bit homophobic is more alike to me than either of us are to those guys.

We are normal people who get up in the morning, take care of our responsibilities, and try our best to be good and do good according to our beliefs. Real people have their own set of values that they strive to live by. Values are not reactions to outside stimuli like sound bytes or infographics, but they are principals that we carry inside ourselves, and follow for following’s sake. Not to get ahead, not to make a point, not even to reap any sort of reward, but to do right because we believe in the concept of rightness. My principals include things like loyalty, honesty, intelligence, and kindness. Things I am sure I would have in common with any reasonable religious person. Things that I can tell from their actions, are not shared by Tony Perkins or Theo Van Gogh.

So who’s pile of dead kids is bigger, the publicity hounds, or the regular people? The homophobia I see in regular people is not a marketing ploy. It’s a genuine fear, sometimes of someone, but also sometimes for someone. Of course that’s not right, my own contempt for religious people has taught me that I can have the best of intentions and still fuck it up completely because of an irrational fear of difference. These things are hard to unlearn. The first step in becoming a regular person is to forget all the sound-byte politics and start to live by principals, rather than reacting to news feeds. Do research, get everything as far away from black and white as possible.

I find that the more time I spend trying to be a regular person, and not a political construct, the messier my politics are, and the more interesting my thought process is. It’s nice to look around and realize that I have no idea where I’m going, or who I’m going with, but wherever that is, I’m going to take my personal principals with me, and apply them there just as I’ve been doing here, and just as I did wherever I came from before that. It doesn’t always work, but I try.

One Reply to “A Pile of Dead Kids”