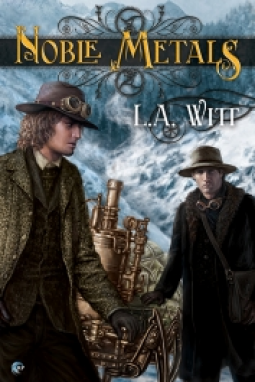 This will be the third L.A. Witt book I’ve reviewed. The first was Capture & Surrender, the second was Static, both received fairly high ratings, and now that I’ve been doing this for awhile, I honestly think they should have gotten at least one more star each than what I gave them. Or half a star more, since I was still using a 10 star system at the time.

From what I can tell this is a Riptide re-release of a book published by Carnal Passions back in 2012. The galley came with the note that it had been “edited extensively and expanded by over 10,000 words.” If I hadn’t read other L.A. Witt books, I would think this wasn’t that bad. I can see her trademark care-taking of her characters very clearly here. But in this book it seems to translate into a strained, politically incorrect paternalism.

Robert Belton is a whore who would be a gold miner. Stuck in a muddy steampunk Seattle, he’s too delicate for the men who don’t want him, and too wary of the men who do want him to accompany them on their voyage to the frozen, gold-laden North. Everything changes when he meets and befriends Dr. John Fauth. Hot on the verge of the next great scientific breakthrough, Dr. Fauth has little funding and a similar distrust of the rough trade miners looking to hire on to a team.

It’s a match made in heaven, or at least it seems like it at first. While nothing in the character’s actions outright say that John looks down on his new lover’s former profession, the frequency with which it is brought up, particularly during sex, started to creep me out. Even though both men are shown to be more than capable, professional and intelligent, I got the impression that we’re meant to feel like Dr. Fauth has saved Robert from his unfortunate position. This even after Robert literally saves Dr. Fauth on at least one large occasion, and then again several other times.

The rest of the plot is good, and I think that some chances were taken by putting the characters in some serious peril. If the relationship wasn’t so squiggy, and in fact, even if the dialog between Robert and John didn’t seem to focus almost 100% on whoring, I think I’d be far more likely to be on board.

Even with the addition of the 10,000 words, this is still a pretty short book. For $4.99 on Kindle, I have to say that there are much better offerings from L.A. Witt alone. Pay two more dollars and get Static if you haven’t read it already.