So it’s hard to unseat an incumbent President. Like, really super hard. Out of 43 Presidents, only 10 men ever beat out an incumbent, and two of those are basically a wash because Benjamin Harrison unseated Grover Cleveland in 1888, but then Cleveland unseated Harrison right back in 1892. Given the Harrison/Cleveland recalculation, that gives any challenger of an incumbent 82% odds on loosing. Not even the worst gambling addict in the world would take that shitty bet.

So we have 9 Presidents in our history who served one term, but only 3 since the end of World War II: Gerald Ford, Jimmy Carter and George H.W. Bush. Ford was never elected in the first place (he replaced a painfully corrupt Spiro Agnew after his resignation), had no electorate to speak of, and chased anybody who was thinking about being a fan of him away when he pardoned that inconsiderate buttfucker, Richard Nixon. Especially since he did this after giving a speech that focused on the restoration of the American judicial system at his inauguration. Ronald Regan actually ran against him in the primary, and won a couple of times before throwing in the towel. Given the circumstances, a hand puppet could have defeated him, and one basically did.

Lots of people seem to like Carter, he is at least partially responsible for the craft beer renaissance in America, but the poor guy had an extremely difficult time as president. If he hadn’t gone up against the wildly unpopular Ford, he probably never would have won. He was just too nice, too honest, and not at all interested in playing the game others spend lifetimes perfecting. The things that make a person someone you actually like, and the things that make a person a President are basically opposites. Just look at the Clintons. One’s a star-fucker who never accomplished anything real in their life, and the other is Hilary. Bad joke, I know, but I had to do it. Don’t be fooled, I still hate them both.

Anyway, Carter, nice man that he was, made several really unpopular decisions, like refusing to let American athletes attend the Olympics in Moscow because of human rights abuses, and reinstating the draft sign-up, even though he had been instrumental in pardoning draft dodgers. After a run-off for his own party nomination against Ted Kennedy of all people, he met more than his match in black-hearted charisma in our friend Ronald Regan, who beat the peanut planting pants off our boy Jimmy.

H.W. Bush’s ‘no new taxes, just kidding: taxes’ routine, and his wooden conservationism was no match for the old ‘cigar in the hoo-ha’ Bill Clinton charm. Also, Ross Perot pulled a Ron Paul and crazied 19% of the vote away from both Bush and Clinton, but not before Pat Buchanan took his own personal chunk out of H.W. in the primaries.

All three men had serious challengers in the primary that divided the electorate when it came to the real vote. This means that even before the opposing team had a solid contender, their own political party thought that they weren’t going to be able to run a good race.

Obama had no challenger in the primary, which makes a win for Romney even more unlikely at this time.
So, if there’s really no good chance of winning, what else is the Romney campaign spending those millions on, and why does he keep saying such stupid fucking shit? The republicans are playing the long con on this one.

When Romney stands up in front of the national convention of the NAACP and chastises the assembled delegates for wanting a handout, or when he goes to other countries and insults their infrastructure in the name of diplomacy, he’s not talking to the NAACP, or the British, he’s talking to the republican base.

Pundits have already pointed out how he’s using the media to telegraph his racist, xenophobic party mainstays back at home while making a complete fool of himself on any kind of national stage his million dollar wingtips can get onto. But what they’re not saying (because that would betray the 24 hour news cycle) is that Romney’s just a clown at political intermission.

And what a perfect clown he is. He’s got a silly religion, so it appeals to the neo-cons, but even Romney’s fun-times fakery church hated blacks officially and barred them from service until 1978, which appeals to the bigots. He’s insanely wealthy, which appeals to the indomitable rich, he’s wooden and unfriendly, which appeals to the people who thought W was too animated. He actually created Obamacare, but they called it Romneycare, and he was governor of a gay marriage state, which rolls in the closet democrats who just can’t bring themselves to vote any way different than their parents did, even though they share none of the same values whatsoever.

Mittens isn’t a serious challenger, he’s just the crowd-warmer for four more years of Obama. He’s the anniversary gift the republicans bought the electorate at the airport on their connecting flight in Boise because they forgot to bring back something from the real city they were visiting, and they’re trying to be good this time. He’s the two dozen roses with the little card that has a dog-house printed on it. He’s a well dressed bag of “who loves you, baby?” So don’t stress out. At least not about Romney. 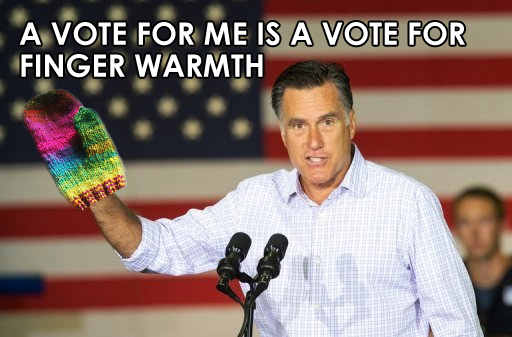 2 Replies to “A Friendly Mid-Campaign Reminder: Everything Is Bullshit”