I started reading this book as research for Jake and Jessica. Deliciois, tantalizing research. 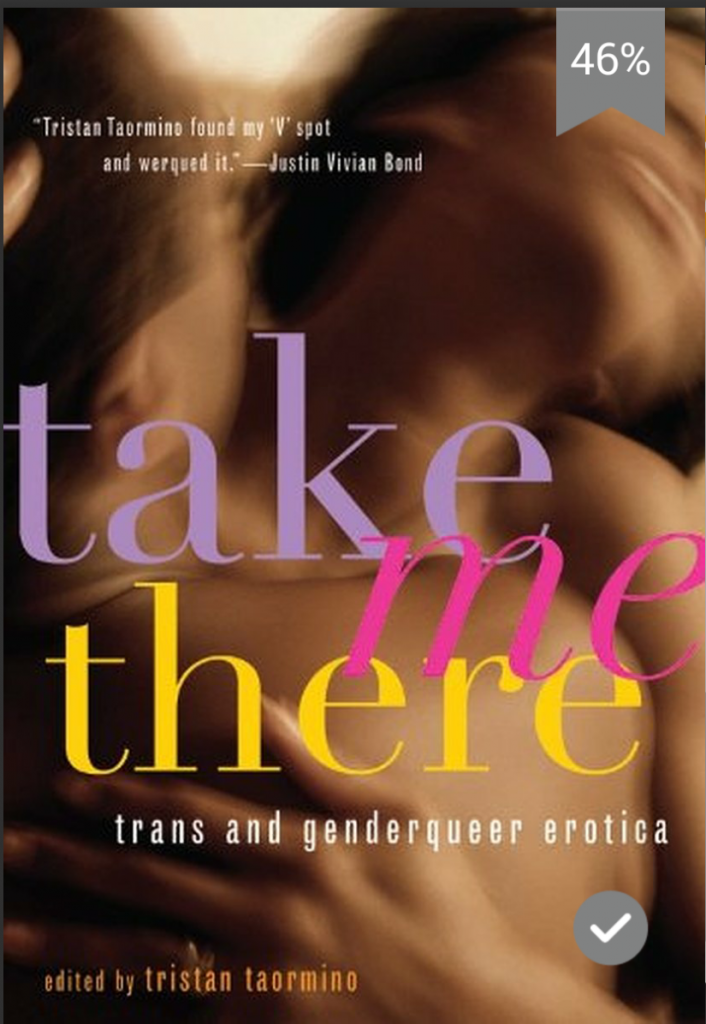 As you can see, I’m nearly halfway through and absolutely enjoying every page. This is truly a good collection, although not as helpful in the research department as I was hoping.

I think. It may be I just am not getting the answers I wanted, so I’m saying the research is a bust when really, I need to pay more attention to what’s being said.

For example, several stories in the book feature a kind of role playing where one partner will talk about their pre-op partner’s genitals as if they were the genitals of their true gender.

Big talk about a transman’s cock, or a transwoman’s clit doesn’t do anything for me, not being trans, so I may well be overlooking the essential significance of the act.

But I’m not really invested in perky tits. Tits in general fail to evoke strong feelings for me.

I’ve never been a good roleplayer. A lot of it seems so contrived that I’d never be able to keep a straight face. So, by extension I don’t think I would be able to write role-playing convincingly.

Then again, the kind of role-playing I’m talking about isn’t exactly teacher and student or naughty nurse. This is an affirmational role-play that, though it’s not spelled out in the collection, seems like it would help someone with dysphoria to feel comfortable. Something I couldn’t know about.

Obviously, it’s just one of the babillion different ways to fuck and nobody’s passing out guidelines here. Or at least if they are, they should be taken extremely lighty. But for a person who has never experienced dysphoria, the concept looms large.

Maybe it’s a little like the way some poeple seem afraid to talk about childhood physical abuse, how I sometimes feel like people are wondering why im not just crying in the corner over my terrible lot in life.

Except that dysphoria is probably totally different than that.

Round and round I go.

It”s late. Im tired. I’ll have to keep chewing on this as I continue to read the book.