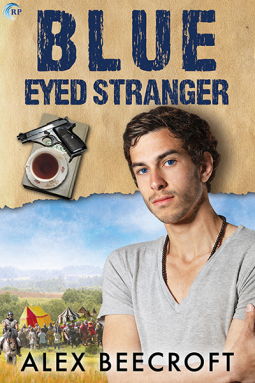 First off, I want to say that I am really happy to be able to read a book with a black main character where he isn’t irrational and in need of the calming guidance of his white partner. You’d be surprised how many people of color, in romance novels especially, are portrayed that way. Even in the more lovingly written stories that were clearly made in order to include characters of color in a positive and accurate light, the white savior dynamic is so often hidden in places I’m sure the author didn’t even consider when they were writing it.

Alex Beecroft, you are a dream.

This second of the Trowchester Blues novels centers around Martin Deng and Billy Wright. Martin’s Somalian father doesn’t understand him. He certainly would understand him even less if he knew his son was gay. Maybe even disown him. Martin’s stuck-up British boss doesn’t understand how a history teacher would be so obsessed with history. She wants him to teach to the book and stop messing around with his historical reenactment society. Martin’s vikings understand his love for history, and would probably understand his being gay, but it’s not like he’s ever given them the chance to.

Billy understands all of this. If only he could understand his own depression. Dancing, music and melancholy are his constant companions until Martin Deng and his viking hoard come barreling into his dance troupe. Martin is sweet, he knows about depression, and he doesn’t ask for more than Billy can give. But does Billy ask for more than Martin can give when it comes to loving him openly?

Can Martin overcome his own insecurities in order to be the kind of partner Billy needs?

I genuinely liked Martin and Billy. Unlike other coming out will he/won’t he stories, I didn’t get frustrated with Martin, even though he really does do some pretty bone-headed things. I understood the pressure he felt, and I related to how difficult it can be to deal with the demands of the monoculture, the demands of your own family culture, and the demands of your heart. History wants to erase minority contributions and families tend to bulldoze individual members to the extent that a person can start to feel guilty taking up any space at all. More than exasperation, I felt elation and empowerment when Martin finally came out, both of his shell and of the closet.

For those reasons, I really enjoyed Blue Eyed Stranger.

However, this is definitely more a romance than a work of erotica. Those who read Trowchester Blues and hoped to spice things up in book two will not be especially stimulated by the direction this went. The sex is pleasant, affirming and sweet. Also rarely mentioned in detail. It’s lovely, but it’s not going to be keeping anybody up at night.

Oh, and if you were looking for an update on the orphan and bff from book one, you will not be getting one. The book one characters are hardly mentioned at all outside one small cameo by Fin.

4.5 stars for being the rare book with a solidly relatable black main character, despite a lack of steamy sexy bits.