Through the magic of tumblr, I was introduced to this post about how Lady Gaga’s body acceptance movement is bullshit. I think if I didn’t have a daily commitment to this blog, I probably would have said my little piece on tumblr (which was basically that Body Acceptance is for everybody, no exceptions) and left it at that. But, I’m in no position to look the gift of content in the context nor turn away this chance to really articulate how I feel about this body acceptance movement that I find myself a student of, rather than an expert in.

What I can say is that body acceptance has been something I worked on, along with other things, largely by myself or with a scant few like-minded friends for at least the last 15 years of my life. Recently, thanks in part to sites like tumblr, I’ve become connected to the community and have become more active online, creating outfit posts, talking about family pressure to lose weight, and my own feelings about my body and my health, both mental and physical.

I had already been ‘recovering’ from my disordered eating for a year or so when I happened to be in the library and found the book Fat!So? by Marilyn Wann. I excitedly told my mother about it, thinking that she would be overjoyed at finding a book for women like us, who had been trained to hate ourselves, but who were trying to learn a better way. It turns out my mother’s ideas of self love had more to do with becoming someone worth loving (usually through concentrated self hate) than realizing her own inherent worth. So, either as a result of a misplaced sense of loyalty, or a direct order (neither would surprise me), I returned the book without reading much of it. I do remember going back to the library to visit it on at least one occasion.

But I had already began to suspect, usually quite loudly, that there was something good in me that being fat couldn’t cover. Slowly, I formed the basis for my own body acceptance and began a journey of self-love and self-confidence that continues today. Over the years, I’ve talked with other people about body image, and as I had these conversations, I realized just how narrow my worldview was. I had been so injured by the specter of fatness, that I wasn’t able to see how everybody had their body image boogie man. Men, women and everyone in-between had been touched by an unrealistic ideal of attractiveness. Sometimes, like me, this ideal fed and encouraged our sickness inside and out until we were willing to end our own lives over our perceived incompetence. Sometimes it wasn’t that serious, but everyone has been affected. Every body has the pressures of perfection applied to it, even the bodies that are supposed to be our standards. There are women for whom skinniness is my fatness, darkness is my lightness, tallness is my shortness. Pretending that self hatred only applies to fat, three-quarters Mexican, culturally Anglo, twenty-something women with a history of physical abuse and a middle class upbringing is just ridiculous. We all sleep with that monster in our bed, crawling up our throats and putting it’s fingers in our mouths. Self-hatred, self-doubt, self-consciousness: these plagues do not discriminate, they come for us all.

So, while I understand the feeling, the gut-wrenching anger that can repeat on a fat person traumatized by the concept of thinness when she is looking at a thin woman and trying to sympathize with her ‘struggle,’ I also have to work past that history. As much as I feel disgust for the things I did to myself while trying to be small and white and cute like Lady Gaga, I have to remind myself that one of the ways I got into this body hatred in the first place was from the enforcement of an unrealistic ideal. It is unrealistic to think that only adorable fatties ever looked at their bodies and wished they’d die rather than wake up one more day as their own miserable selves. And if that’s the authentic body hatred experience that everyone in this movement needs to have in order to qualify for membership, than 1) I hope I’m the only person here, but 2) every person on this planet probably qualifies.

If Lady Gaga wants to be a champion of this movement, I have no complaints. I wholeheartedly agree with the criticism that her body acceptance parade seems awfully white, but then again, so does her fanbase. I’m not going to tell her she needs to stay on her side of the movement, she can do and say whatever the damn hell ass she wants. Just like I can, and just like everyone can. If someone else wants to reject LG’s body acceptance spiel on the basis of her thinness and her whiteness, then that’s their prerogative. However, I feel compelled to say that you’re shooting yourself in the foot when you do that. Body Acceptance doesn’t have a maximum occupancy, and the kind of social, cultural change that I, as a fat person, am trying to encourage in my own small way can not be carried out by myself alone. The pipe dream of body acceptance for me, isn’t fat models, or attractive plus sized clothing, or even understanding doctors. It’s a world where beautiful is just one of the billions of things a person could grow up to be, a world where models are right sized, physically and culturally. It’s a world where self hatred isn’t used as a marketing ploy.

This is by no means realistic, but I’m going to continue to write my blogs and post my pictures because once, I really wondered if I was crazy for thinking I might be worthy of love in spite of myself. Then, I saw that book, I talked to other people, and started to work on listening to my own truth instead of trying to conform to what everybody else wanted. And if Lady Gaga in matching underwear gets somebody else to do that too, then who fucking cares what she looks like? I didn’t build this movement, and like I said, I haven’t really been here that long, but I don’t give a shit how you got here. If you’re interested in body acceptance, and you’re tired of living in self-hate, come on in. And if people feel like certain other people shouldn’t be welcomed because of how they look, well they can just look somewhere else. 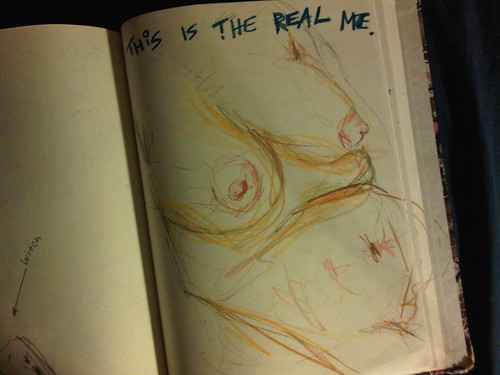 A sketch I drew after seeing a commercial for a diet plan that promised to “unlock the real you.”

2 Replies to “Welcome to Body Acceptance, Now Stay on Your Side”