Despite being barren and having no nearby mom friends, I have still seen the paranoid delusional posts about suburban moms being afraid of mysterious foreign men attempting to snatch their lily white babies from crowded IKEAs and other brightly lit and heavily camera-ed shopping establishments. But I had no idea how rampant this hysteria had become until friend Althea pointed me to this Facebook gem that we are about to get into right now.

I’m just cutting pieces off this amazing narrative because I want to preserve the anonymity of this poor dumb woman but I have to talk about it you guys. There are issues layered upon issues not the least of which is racism couched in some seriously flawed reasoning.

So the basic story being spread around the Internet is this: Delicately virtuous white Christian mom goes alone or with other female family to a big box store, (the most famous one was said to have happened at IKEA) when suspicious and foreign looking men stalk their precious babies. Because of telepathy, the mom in question instantly knows the men are after her children for dirty sex reasons and immediately goes on Facebook to tell the world about how IT COULD HAPPEN TO YOU.

The mom in this story is no different.

Oh, those exact dudes? Her description of the men was this:

A man, his dad and his kid of any race from Salvadorian to Bangladeshi could easily be described with this sentence. There’s no attached picture. She doesn’t even say what they were wearing. And yet, these “exact” dudes were in this same mall.

She goes on to ensure her readers that racially profiling random men as Middle Eastern is not racist, because she is not racist.

What a convenient way to side-step the fact that we live in a systematically racist society and that half the shows on television (including the news) are consistently pumping images of bad people of color into our heads so that when we see someone with darker skin than us the Pavlovian fear response is loaded and ready to go.

OBVIOUSLY. Obviously she doesn’t understand other languages. Why would anyone expect someone who lives in a mutli-lingual world to have any understanding of other languages at all? And why would two people speaking another language to each other have anything to do with a random English-speaking white person who just happened to be standing nearby?

Again, her passive aggressive “whatever” really means that she feels threatened by people who speak languages other than English, but she’s been to college so she knows she’s not allowed to say that shit without couching it in multiple levels of qualifiers.

Which leads me to the 99% of times immigrants being scary is not a real threat and the fantasy 1% of times that it is. Immigrants to this country are historically and statistically less likely than their native-born counterparts to be criminals. So if, according to one study “native-born Americans were approximately four times more likely to report violent behavior than Asian and African immigrants,” than we must assume that for every one West Asian person this woman feels threatened by in a day, four American born citizens get the same treatment, which we will see is extreme.

For the uninitiated, this is a push knife: 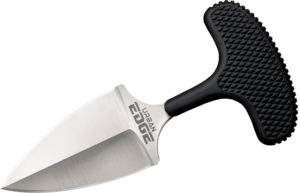 It looks like downloadable content from Assassin’s Creed. Anybody carrying one of these bad boys is not. fucking. around. The push knife is illegal in Canada and, according to the wiki page, some American states, but as far as I can tell the only one that vaguely bans it is California under the category “scary knives.”

Which makes the next part of this story all the more odd. After seeing the two men and the boy in the store initially then running into them again in the toy aisle, where the kid (horror of horrors) was looking for a toy, this self-identified paranoid mom sprang into action.  (Her children’s names have been concealed for obvious reason.

Let’s paint this picture: You’re out with your dad and grandpa in the local JC Penny. You’re 11 or whatever, and you want people to like you. Which, in America means fitting in. So maybe you don’t answer back when your dad starts talking to Grandpa in their native language. Maybe you even throw in a pissy pre-teen “we’re in America, people speak English here, GAWD.” Then your dad tells you not to disrespect Grandpa and you’re not a total ass, so you’re good the rest of the trip. Which is why dad says you can get a toy if you want.

So, you’re headed to the Lego Minecraft set like foook yessss when all of a sudden, you see frantic movement from one aisle over and realize that the white lady who was giving your dad the stink eye earlier is waving around the scariest fucking knife you’ve ever seen. She has one kid half in and half out of a carrier on her back, and another one looks recently dumped into a stroller that she is awkwardly pushing behind her and flashing the knife straight at… someone past you? You look around but there’s no one else near. So this is about you somehow. How could this possibly be about you?

But before you have the time to truly grasp why a stranger in Penny’s wants to stab your grandpa, your dad leaps into action and whisks you guys to safety, well away from the scary lady.

Of course, the knife-wielder had a different story.

Well, duh. You were brandishing A KNIFE at them.

She continues her story without a lick of irony.

We really do need to be careful. The next family might actually get stabbed by the crazy lady that pulls a knife on them for being not white in a white supremacist country.

Which is what makes this particular fake kidnapping story so interesting to me. The two men that set this woman off were accompanied by a ten or twelve year old boy by her own admission. Her assumption that they are kidnappers leads to the logical conclusion that this boy is also a kidnap victim. At no point does she try to save the non-white child. Nor does she address what must have been an agonizing choice to save her own children over trying to help this poor kidnap victim.

Because of course this isn’t about children. If anyone was a danger to the children it would be her, throwing the baby in his harness and buckling the toddler into her stroller while clutching a giant scary knife. This was about white fear of the other.

In fact, after some of the comments pointed out the obvious racism involved in the story, one woman all but absolved any behavior so long as someone feels threatened by a person of color.

“Stop making it about racism” in a story where the armed woman threatening the unarmed family is the victim because the family in question is not white.

This is the face of white racism, and it has been for hundreds of years. The imaginary white victim that justifies any level of violence against people of color. The white victim police officer that, despite all his training, is justified in shooting an unarmed black child to death. Not just once, not just in one place, but over and over all across the country.

How many millions of people of color have died for the sake of white feelings? And how many more will die in the future? Because this isn’t over. And this isn’t just a weird story about a batty lady being crazy in the store. This is the story of systemic racism that runs so deep that this woman not only feels like she’s the hero of the story, other people agree with her. Some people wish she’d done more to harm these men and their child.