I went to the dentist today to get a check up, and after painfully poking at the same 5-10 spots on my gums for about 15 minutes, she told me that I have 3 cavities, and I need a deep cleaning. Also, I have a weird situation happening with my front teeth where they look fine on the outside, but on the bottom of them, where there should be a solid tooth surface, there’s a weird upside down U where the inside of the tooth is worn away. It’s been like that for years, and I always blamed it on my childhood bulimia and anorexia, although I really have no reason to except that I only noticed it during that time. Anyway, my dentist says that the two sides of the U are finally starting to chip and wear, and that she can fill them to prevent them from breaking completely and fucking up my front teeth forever. But the stuff she fills my cavities with is a whiter white than my teeth are, and I’m worried that I’ll look all lopsided. I guess these are questions I should be asking her instead of wondering about on my blog for you fine people. But just in case, has anybody ever gotten their front teeth filled? Did it look funny?

Anyway, I have to come back on the 19th so they can clean half my mouth and fill two of my cavities, then I have to come back again so they can clean the other half, the remaining cavity, and fill in my front teeth. Also, the dentist said I have “bone loss” and that the bone graft I got in 2011 when I had my wisdom teeth extracted might not be working out the way it was intended to. I am so fucking afraid of the dentist that I’m already kind of wishing for death, as well as wondering how important teeth are anyway. I mean, they make dental implants now, you don’t even need poligrip!

I’m never any good for anything after a dental appointment, so I’ll sign off now and go take this dog for a walk before I completely unload about how I totally feel like an absolute failure for getting 3 cavities, and how I’m ashamed that my jaw bones aren’t graft-able enough for modern dentistry and how I really just want to curl up in my bed and cry like a baby because I had a hard day and my mouth hurts… but not nearly as much as it’s gonna hurt.

Although, if I do have one positive thing to say about this whole ordeal it’s to thank my fat white lucky stars for dental insurance, because this would have cost me something like $1150.00, but with insurance it’s only $260. So much for replacing my iPod in 2012. But I’m actually OK with that because I’d already decided to just use my phone for everything. It’s been working out really well as my replacement media player, and it’s nice to not have to carry anything but my phone.

I still feel shitty though. The level of personal responsibility I take for having bad teeth would be hilarious if it wasn’t so appalling. I go to the doctor, and she tells me I’m too fat, my response is basically ‘eh, what can you do?’ But when the dentist tells me that I could have prevented these cavities by flossing 7 times a week instead of 2, I literally have the urge to self harm for being such a terrible, careless bastard. It’s actually a point of family pride that my great grandmother only ever got one cavity. My grandma is 80 and tells anyone that will listen that she has all her original teeth. At the rate I’m going, these teeth won’t last ’til I’m 40. I’ve brought shame on my family. I am truly a monster. 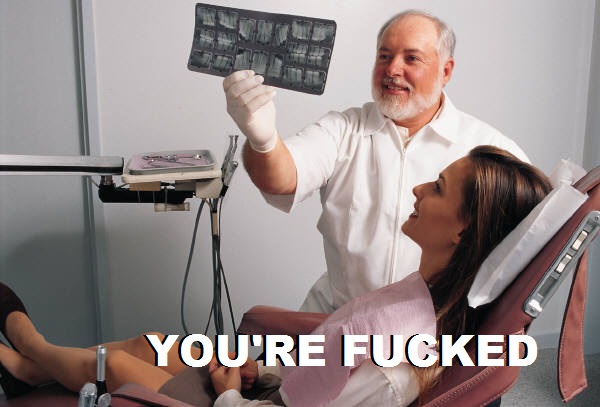