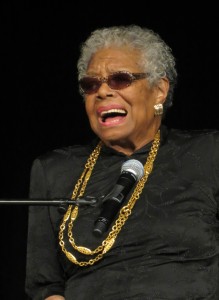 Just as there will always be people to tell you that you can’t do things, there will also be people who tell you that you can. Maya Angelou is responsible for some of my very first conscious memories of hope. The idea that I could be my own person, that being literally beaten down today didn’t have a bearing on my actions tomorrow. That what was said to me, about me, didn’t have to be who I am, and especially not who I would be ultimately. She gave me the idea that I could belong to myself, define myself. She highlighted an escape route that I did my best to memorize.

I don’t know when I first read her work. I know that her books had been in my house for decades before I was ever born. It’s so ironic that my grandparents could read so many of the same things I did and come to such very different conclusions about how life was lived. But I guess that’s not really fair. Politically, my whole family is very much the same. It’s only in terms of how we treat ourselves and others on a personal level that we start to see massive differences. And that has way more to do with mental health and unaddressed trauma than any conscious thought process.

In a household where I was told I was the problem, where choice was something other people had, the consequences of which I had to endure, Maya Angelou seemed impossibly conceited. The gall of her personhood was remarkable, and inspiring.

Her poetry is simple and didactic, but it’s easy to consume. And for the person I was, the child I was, it had to be spelled out. The idea that I could stand straight, that I could belong to myself, that I could also rise was completely new and nearly impossible.

After years of reading books and memorizing poetry by alien white men, most of whom were dead; stories where women were ancillary characters, and women of color were nothing, where only the wealthy had adventures, where the rest of us were slaves, and maids and non-verbal sidekicks, this was a revelation.

I always loved writing, and I wrote obsessively, but I never saw anyone like me in print. I remember the first time I saw the Mexican American Girl Doll, I was totally into it until her book said she lived in a mud hut and I had to explain to the friend who’s book it was that no, I did not live in a mud hut. (Or at least this is my memory of the book and the exchange.)

Maya Angelou was a beacon for me as a young person. When I felt lost, I could look at her work and know at least that it could be done. As I read her whole autobiography, I realized that we had extremely different lives, and that I didn’t necessarily want to make my escape in the same way she made hers. I was still very much afraid of men, and completely uninterested in making them want me, which is a major theme for her, and for her work. I sought out writers who had disdain for the male gaze, usually gay men who’s female heroines were brash and crude, and a little bit cruel. Sandra Cisneros, Greg Araki, and Allen Ginsberg spoke more to the me I had become than Maya did. But it was because of her original influence that I became that person to begin with.

I am so grateful.

2 Replies to “Up From a Past: What I Owe To Maya Angelou”