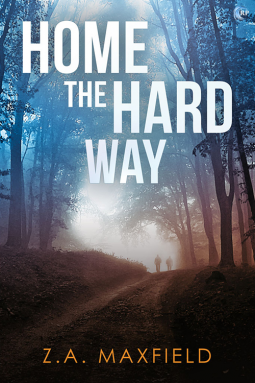 I have to admit that I wasn’t that interested in Home the Hard Way when I first saw it on the NetGalley shelves. Disgraced cop returns home to his twinkey childhood best friend and attempts to solve an old mystery sounded like pretty standard fare.

How these things usually go is this: the twink feels hurt after being abandoned by his straight crush, and the not-so-straight crush has to man up and admit their soul-mate level bond after one or more amazing blow jobs from his slightly embarrassingly femmey “bro.” At which point, closet case straight cop turns into a gay rights activist, but never has to deal with any real danger or adversity and life goes on as normal because people are just so damn happy about love.

Home the Hard Way definitely puts the old convention, if not on it’s ear than at least on it’s knees. When Dare Buckley comes back to his minuscule hometown in the Pacific Northwest, he expects some degree of animosity, both for the scandal that sent him running home, and for the apple carts he plans to upset in the 15 year old mystery of his dad’s uncharacteristic suicide. But what he doesn’t expect is his former best friend Finn Fowler. Finn was the little brother Dare had always wanted, someone to protect, someone to look up to him and boost his confidence with hero worship. But something’s changed… for both of them.

Diminutive and openly gay, Finn is used to keeping secrets and taking care of himself. So by the time his boyhood crush comes back to town, he’s quick with the brush off for a man who couldn’t possibly reconcile the starry-eyed kid he was with the confident, leather dom he’s become. He takes no time to figure out that Dare wants him, even that Dare craves discipline, but the idea that they could have more than secret sessions in the dark both terrifies and excites him. It’s untested waters for them both, and when Finn becomes involved in a murder investigation, it looks like Dare’s poor decision making has come back to bite him in the ass. Or can he really trust this man he loves, but doesn’t know?

I fucking loved this book. The idea that the little gay kid would be holding all the cards while the masc. cop who left him behind would be the needy wreck was entirely novel for me. The leather component took me completely by surprise, and was incredibly hot. Character development is top notch. There’s no good guys or bad guys in Home the Hard Way. There’s no cut and dry answers, either. Just people trying to find their way in a sometimes cruel and uncaring, but also sometimes genuinely beautiful, generous world. The alliances and secrets that hold us together, keep us apart, and make up our lives are a character in and of themselves.

The slow burn tension and suspense had me compulsively skipping to the bottom of the screen. The murder mystery and the romance vie for attention, which is just how I like the levels in my romance/mystery combos.

If I had one complaint, it would be that it seems like Riptide (of course this beautiful piece is a Riptide release) has no intention of publishing this on the Kindle* store. It’s paperback or nothing on Amazon at $17.99 for regular users, and $15.99 for Prime users. If you want a kindle format, it is available on the Riptide site for $7.99, and well worth the price.

I just ran a test of their shopping cart process, and while nothing is as easy as the Kindle interface, Riptide doesn’t make it much harder than it has to be. As long as you know your Kindle address, and you’ve submitted the riptide address as an approved email on your kindle account, you can send the title to your Kindle by clicking a button next to the book in your “My Account” section, then entering your Kindle address into the field provided. As far as I can tell, there’s no way to save the Kindle address, or make sure that future epub purchases go there automatically. That would be on my wishlist if they want to continue to keep epub off the Amazon marketplace.

*EDITOR’S NOTE: My mistake, the title isn’t on Amazon because they, like many etailers, don’t allow pre-sale for digital books. As soon as the publication date arrives, you will be able to purchase Home the Hard Way in the Amazon store.