I play all my games on easy because I have a saying: Life is hard, videogames should not be. I also have another saying: Life is boring, videogames should not be.Trials Evolution is neither boring, nor difficult…at first. It never gets boring, but it also happens to get insanely difficult, and sort of in the way where you can hear the developer laughing at you from the ether as you crash face first into an oil barrel, a stone fist, a shipping container, and so on. Really, when you buy Trials Evo, you’re getting two games: a fun, visually stunning, self aware motocross game, and a serious platformer with an outpouring of creativity and depth behind it. Even if you only appreciate one of those things, this game will be good to you.

First off, let’s get to the basics. Every course shows three medals that you can get: bronze, silver and gold. I’ve read that if you do insanely well, you can get a platinum medal, although there’s no spot for it on the stats page, and of course I’m not about to bring my 45 second run down to 25 before this review is out the door. Just completing a course will get you a bronze medal, everybody gets that. Silver, gold and platinum are doled out when you make a certain time. The game won’t tell you what that time is, but it does offer a handy little yellow dot with your name on it to show you where your best time racer would be if you were racing yourself. It also shows you handy white dots with your friends’ names on them so you can not only see who’s kicking the pants off you, but also glean how they’re doing that. If they hang back on a jump you gun it on, and end up face planting at the end of, you can get an idea of what to do next time. But even if you do crash, it’s usually a good time because the rider will fall out ragdoll style, much to everyone’s amusement. If you don’t get to see your rider crash, you get a treat anyway because at the end of every race, the rider is usually exploded, or dropped, or catapulted to his death in a rather graphic way, which is awesome and funny. 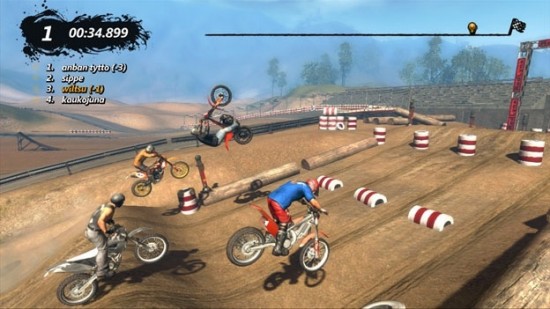 Trials Evolution has four basic sections separated by four different tutorial levels, or license tests. Licenses D and C have one level each, licenses B and A have two. The levels have anywhere from 5 to 12 courses in them for you to ride. In order to get to the next license test level, you must earn a certain amount of medals. This is always more medals than you can earn by simply completing each course, which is a good thing. At first, I was annoyed by the repetition of courses, as I am always annoyed by having to repeat anything at all ever (pet peeve). But my annoyance was diminished by the fact that these courses are beautiful and fun, and the better you are at riding them, the more you can take in the course while you go, and the more delightful it is when you don’t keep crashing all over the place. Besides, Trials isn’t really a game you want to blow through. If I hadn’t been writing this review, I would have moved a lot slower through the levels.

The License D beginner level is called Walk in the Park is exactly what it says on the tin: No rough stuff, above the belt, over the clothes and all that. In License C’s Fuel for the Flames, it gets a little more exciting as you can do more complex tricks with your bike, so you get more interesting courses to ride.

License B is where the game starts to take a turn. The goal is still to complete the race in good time, but instead of racing through and trying not to fall, the player will notice that speed is not really their friend. These courses have a lot of jumping the bike, stalling it at just the right moment, and taking advantage of weight shifting in order to manipulate the machine to cover varied and unpredictable terrain. The first of the B license levels, Terminal Velocity, isn’t really that bad: It’s interesting to shift gears and try something new. I’ve always been a fan of platformers, so this is definitely fun. Although difficult, it’s rewarding to coax the bike into new and different feats of agility. The second level, Cutting Edge, is where they lost me. This tedious, concept album of a level feels like it’s basically a collection of all the courses the developers made when they were messing around after work. There’s a completely black and white course with the camera fixed at a panorama in which you have to navigate moving gears as a feature. There’s also a seemingly never ending course where the respawn points are as far away from each other as the length of some other courses in their entirety. Someone on my friends list managed to finish it in 14 minutes, earning them a bronze medal. I spent thirty minutes in the same position, gritting my teeth trying to get through this course before the game decided I was finished for me. My feet, legs, butt and trigger finger all went numb and I got nothing. 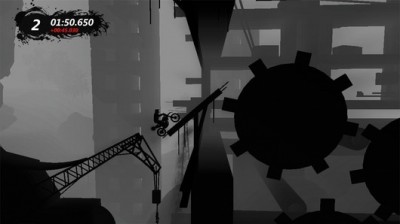 Needless to say, I was unable to make it to the A license test. If you play the game at a leisurely pace, unlike myself, your skill level will increase naturally over time, and I have a feeling that you’ll appreciate the insanely hard upper levels as you continue to play.

Not being a big fan of getting cussed at by 12 year olds, I don’t find myself on live that often, but as this is a review, I played a couple of rounds. Live play is really simple. There are 3 or 4 players on a track, your name is colored a nice green and trails out behind you as you ride, and the tracks are from the game so you’ll be familiar with them. Everyone was younger than me and better than me, so that’s nothing new. At-home multiplayer is more fun, in my opinion. Multiplayer supports 2 to 4 players, names in white, familiar tracks except modified for 4 people. If you crash or fall behind, the game kindly respawns you at a future point in the course so the screen doesn’t pan out too much. Points in multiplayer are calculated in an obscure way and frequently the person who finished first is not the real winner. I think this may have something to do with respawns and tricks, although I wasn’t really able to figure that out completely.

I liked that bike and rider customizations carry over into multiplayer both at home and on live. I often have trouble telling my track from that of the other player, even if my name is sticking out of my head the whole time. Something about there being more than one person on the screen always makes me look at the other person’s character. Customization in this instance can be invaluable. Besides, I was always the kind of kid that dressed her barbies up and then threw them back in the box, so you know my biker is fab-u-las. Also, he keeps me from trying to drive another player’s bike, which usually results in me crashed and flailing around for several seconds while my eyeline follows someone else’s rider off the screen. 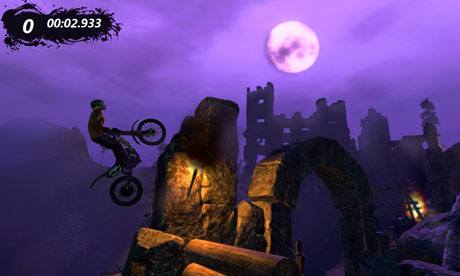 Speaking of customization, I also tried the level maker. Having only ever dealt with the level maker from Little Big Planet, I can honestly say this is the easiest, most intuitive and helpful level maker I’ve ever used. Ever. There are two different kinds of level maker: easy for the casual creator and pro for those with broader talents. Unlike in Trials HD, the predecessor to this game, you can share your levels with every other user, and download levels to play yourself. Let me just say that people have been busy. There are already a ton of different levels to choose from. Most of the higher rated levels are homages to other games or movies. I played a recreation of the Terminator 2 LA River chase scene by one suttonleo2 that was rather awesome. Of course, fan made levels won’t have the smoothness of finished game tracks, but what they lose in catchiness, they make up for in creativity. The semi truck in the terminator course was made entirely out of gameplay materials, none of which is a semi truck.

Overall, I highly recommend Trials Evolution. For 1200 microsoft points, or roughly 15 American dollars, this game is a great one to have around the house. It’s fun to play with friends, it’s fun to play for a wind-down, it’s even fun to play on Live. There are tons of hours of entertainment packed into this thing, and for only $15 it’s a hell of a deal. Yeah, I got frustrated with the higher levels, but those aren’t there for someone who’s only had the game a week. This is the kind of game you go back to over and over again. This is the game you pull out when your mom wants to know why xbox is so fun, this is the game you sit your little cousins in front of on Thanksgiving, this is the game you tool around on when you’ve got no plans and the television sucks. The price is right, the game is fun, I’d buy it for you if I liked you enough. What are you waiting for? Get this game!