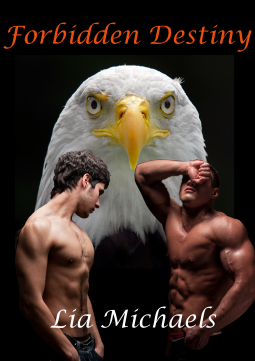 Can we just admire this amazing cover art for a second? So majestic.

Anyway, Forbidden Destiny is the first foray into M/M by straight/lesbian fiction author Tammy Dennings Maggy. It is an extremely short book, 33 pages, according to Goodreads, and it goes by quickly. I read it in a single evening.

The plot tries really hard for all the small stature of its book, which is supposed to be the intro to a series, so I don’t understand why it was so hurried. We meet our main characters, Abraham Tuttle and Ethan Quaderer through dream sequences and some small exposition where we learn that they are:

The galley summery says that Abraham is a two-spirit, but as far as I can tell he’s just a regular gay guy, as is Ethan, who’s grandfather refers to both men by this term. As far as I know, two-spirit people in Native cultures are usually men and women who feel that their gender is a duality, or that they should occupy the gender roles of the sex they were not assigned at birth. That has nothing to do with hetero or homosexuality. A lot of the history of the two-spirits, along with other specific Native traditions have been lost to the ages and the occupation of indigenous lands. So who can say for sure? Although, I think if Michaels had read the Wikipedia page, she may have chosen a different term.

Language aside, there are a lot of things I had trouble with in this book. The writing can be difficult to read. The cadence feels awkward, there’s missing punctuation, and some rapid tense shifting. Other reviewers have been way more upset about the tense shifting. It was obvious to me that the author was trying to separate the eternal now of the shared dream space with the rhetorical now of the story. I wonder if that was the best way to do that, or just the easiest. The fact that the dream sequences are entirely in italics makes either the tense or the style completely redundant. But maybe not, if other readers couldn’t figure it out. There’s definitely a dearth of descriptive language.

The origin of their relationship is revealed via flashback. Apparently it was love at first sight, but the fact that Ethan was already a fully realized were-eagle, and that Abraham was unable to believe in his own were-eagle abilities, despite Ethan’s belief in them drove a wedge between the young Rangers in training, and after one really dumb-sounding fight, neither man spoke to the other for fifteen years.

As far as I could tell, they were both in Afghanistan for the entire time, they just never ran into each other. Or picked up a phone. Or wrote a letter. To meet and know the love of your life, destined soul-mate, partner, and fellow savior of your people, and then not talk for fifteen years seems a little more than overkill. Then, to add insult to injury, the entire fight is resolved in about three and a half lines. This grand reunion is followed by some fucking I don’t even remember. Then Abraham shape-shifts into an eagle and they get ready to save their people in book two.

If you’re wondering what the fuck I just wrote, that’s the exact feeling this book produced for me. So I just saved you $1.99 and 33 pages of trouble. You’re welcome.

Then there’s this: I notice that Lia has four five-star reviews on Amazon, and three five-star reviews with text on Goodreads. The three reviews on Goodreads are the same as three of the four on Amazon. It looks to me like her ratings are being inflated by devoted fans of the books she’s written as Tammy, which is cool, everybody loves fans, but this is not a five star book. This isn’t really even a passable first effort. It feels like it was written over a weekend and never proofed. If there had been good first readers, the kind that aren’t afraid to say the things I’m saying now, this could have been a way better book.

I’m not bugged by the were-eagle element. I’m not even really bugged by the 15 year hole in the relationship. I am bugged by the sloppy exposition. I get that you need your characters to be in their 40’s, or whatever. Cool. Just make it seem real, or the entire book series is about a couple of the dumbest morons on the planet. The author should have spent the first 33 pages of book one talking about the boys before they even met. There’s a lot of good stuff there, apparently they were dreaming about each other their whole lives. And yeah, that totally is an M/M cliche of the highest order, but this is romance, not fucking Tolstoy (who has his on genre-related cliches, let’s be honest).

For sloppiness, lack of research, and poor ability to pick first readers or editors, I give this novel: