So, you guys remember that Jake and Jessica poll I put up in… oh… October?

Well, I completely forgot about it. Sorry.

But I’m back. All settled, and ready to make another story adventure about Jake and his gal pal Jessica. You guys voted, 40% for a victory dance, and 40% for fresh cut flowers. With a sad, and straggling 20%, a flashback will not be happening in Chapter 4.

I know it’s been a long time, so please find links to the previous chapters below:

Chapter 4 – The Jake Must Go On

It wasn’t hard to figure out which of the Ladies was Kelsey. While the other ladies, and honorary ladies, as they referred to the men in the group, showed up with various foods and drinks, Kelsey brought fresh cut flowers. Yellow roses with a blue ribbon.

Jake waited for Jessica to correct her. Everyone in LA knows Laker colors are yellow and purple.

“They’re beautiful” Jessica said as she took the flowers from Kelsey. “Let’s go into the kitchen and put these in some water.”

As she lead Kelsey away, Jes shot an accusing look back at Jake. He lifted his hands in a gesture if innocence and surrender. If the chick didn’t know what color the Laker colors were, he wasn’t going to make her feel bad about it. Or at least he wasn’t now that Jessica had admonished him not to.

Jake had heard about the Ladies’ Auxiliary, but he’d never met any of them. They spun around him in a dizzying rainbow, putting out food, setting up the TV, chatting with him and with each other.

“This is Jake” Jessica had told them all. “His cat died today, is it cool if he hangs out?”

The majority of the ladies had made sad, soft sounds about The Annihilator, giving their condolences, and asking him questions. Several of them shared their own cat stories.

A fine-boned boy, eye-to-eye with Jake, but at least 50 pounds lighter than him, put his hand on Jake’s forearm. “My parents won’t let me see my cat since I came out.” He dropped his head. “I’m always afraid something will happen to her, you know, while I’m gone.”

Guilt started to tighten his chest, but then a hot rush of secondary outrage shot through him. Yeah, Annihilator had died alone, but every day up until that point, he’d been loved, he’d been treated well, and he knew he had a good friend in Jake. The idea that this kid and his cat didn’t get the same because, of what? Simple bigotry? It boiled his blood.

The kid looked up, almost amused at the belligerence in his statement. “It’s okay. They take care of her.”

“You can’t have cats at your apartment?” Jake asked.

“Actually, I got an apartment that allows cats in case they gave her back.” He looked around the room. “It’s kind of stupid. They don’t even talk to me.”

The boy laughed. “I have thought about it. With my luck, I’d get caught, end up misgendered in the news, correctly gendered in lock-up, and pregnant with Bubba’s baby inside a week.” He made an ick face.

Jake chuckled, but his anger hadn’t fallen away. “Is she an indoor/outdoor cat?”

“She might be now. I know my dad was always bitching about how cats should ‘shit outside, like men.'” He paused. “Which probably gives you a more detailed picture of my childhood than you needed.”

“I know you’re trying to change the subject” Jake said “I’m not going to let you.” The kid smirked, and Jake felt bolstered enough to continue. “If we happen to drive by the house with cat treats and her favorite person in the car, that’s not theft. That’s just a cat making a choice.” He pointed at the kid and waggled his eyebrows in a ‘waddya think?’ gesture.

“GAME’S STARTING” yelled Brenda. “All you bitches, just shut the hell up.”

Jake pointed to himself, then to the guy, who’s name he realized he’d never learned, then back to himself again and mouthed the word ‘LATER’ as they took their seats. In response, his possible future accomplice bowed his head.

Jes was right. Brenda was a die-hard Lakers fan. While Jake spent the first minutes looking at Kelsey, waiting for her to realize her mistake with the Laker colors, and getting more and more confused when she didn’t, Brenda shouted, yelled, and sometimes jumped up and down for every basket, near-basket, and miss. When the team finally won, she jumped off the couch and strutted back and forth in front of the TV shaking her hands and waving her arms in what Jake could only guess was a practiced victory dance. Someone threw popcorn, and Brenda tried, failed, then succeeded to catch some in her mouth. She opened her jaws and displayed the piece she’d swiped as others tried to score a free throw into her open mouth.

He was laughing. This was the most fun he’d had in months. The kind of fun he missed about hanging out with Jessica. She’s always been the rhythm of a party. She could get other people to perform by building their confidence and drawing them out, in ways that tended to come off as overbearing when Jake tried them. It’s what had made her such a good wing-man. Sitting in her living room, thinking back on their college days, Jake wondered if she did this to take the focus off herself. If getting other people to be the center of attention was her way of hiding.

Across the room, Jes and Kelsey were deep in conversation. Their bodies were turned towards each other and Kelsey’s leg was flung casually over Jes’s knee. Jake was contemplating the scene when the skinny boy from earlier sat down next to him.

“Were you being serious earlier?” He said. “About the cat, I mean.”

Jake thought. He wasn’t into crime, or activism. Until Jessica, he probably had never cared about a cause in his life. His dad was big into what he called “the struggle,” but to Jake, it always looked too much like complaining. Maybe it was the grief talking, maybe it was the desperate hope in the kid’s eyes when he’d talked about her, but the outrage Jake felt for the guy was palpable.

“Yeah.” He said. “That’s really fucked up. Nobody should have to live without their cat if they don’t have to.”

The kid smiled, brought his fingers to his lips, and then suddenly removed them, reaching out to Jake.

“I forgot to tell you my name. It’s Brandon”

Jake gave his own name as they shook hands. “So, what are you doing after this?”

“Actually,” Brandon said “My parents are probably at church for the next two hours at least.” 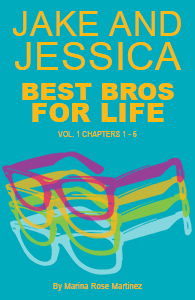 4 Replies to “Jake and Jessica – The Jake Must Go On”