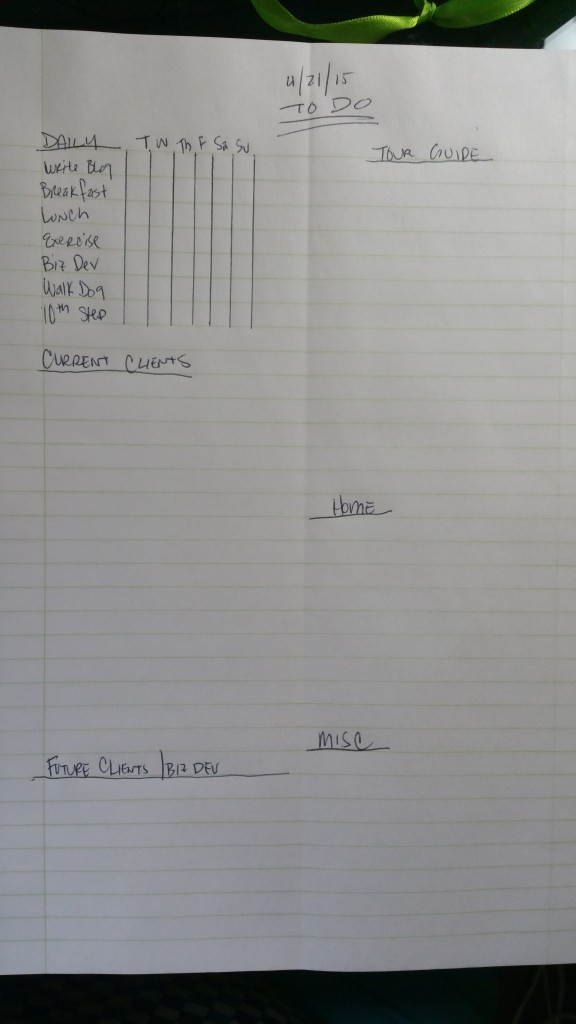 I mentioned that I overhauled my to-do list again. Click here to see the list I upgraded from, if you so desire. Thanks friend and Patron Tiffany, who recommended Getting Things Done by David Allen. That book was a major inspiration for the changes I’ve made.

As you can see, I got rid of the day sections from the previous list. It proved to be unhelpful. If something didn’t happen on a Monday there was no easy way to move it to a Tuesday. Mostly all it did was serve to clarify how little it matters exactly what day the vast majority of my shit has to get done. Which made me feel both free and useless at the same time.

I also got rid of the “Back Burner” and “Want” sections. They now live one one sheet of paper called “Someday Maybe” that sits in my inbox, which is another new feature, and a physical box (more on that later).

The “Daily” grid survived the purge, as it has been extremely helpful in making sure the bare minimum of self-care is at least thought of, if not done. I got rid of the tedious little boxes I had when I first started making it, and draw table lines now, which is way faster and somewhat calming. Now I just put an X in the table cell if that action was done. Everything does’t always get done, and lately I’ve been more of a mindset that it doesn’t have to. It’s more like a visual representation of what’s going on with me. For example, if it’s mostly empty, I’m being a shit to myself and need to step up my game.

For this go around, I also changed my email procedure, if you could call it that. I used to write down any pressing info that was emailed to me, and then ignore the inbox, which had nearly 8,000 emails in it–all inbox items I had once thought were relevant enough to keep front and center. Or at least as front and center as 8,000 of one thing can be. Now I have three major inbox sections: Consulting, Tour Guide, and Home. Those are then broken down by client, tour, and status. Status for all three sections is either “follow up,” “informational,” or “someday maybe.” Every email is either labeled or deleted.

I mirror the email sections in the to do list sections. That way, when I’m making my to do list, the “follow up” items are either taken care of right then, or added to the list. After that, the emails themselves are further categorized and archived. I feel like every single email that comes to me actually gets the attention it deserves now. Which has also prompted me to unsubscribe from a crapload of unnecessary email lists.

The list itself still has the checkbox convention for now, where one line means “done” and the other means “checked.” The truth, I hardly ever use that anymore, and the majority of things I do don’t need double checking. I think I’m going to keep it only for the things I actually should double check, and leave it off the others since the list is actually much easier to read when things are completely struck-through, rather than simply checked off.

As you can see here, now that I’ve filled in the “Home” section for this week, there are little letters O, M, H, and T respectively in different combinations for every action. There’s also a B on some other sections. O stands office, M for mobile, H for high-energy, and T for tired. B stands for Ben, because there are some actions I need to do with Ben or consult Ben on. So, calculating our 2015 tax overflow (the taxes we didn’t pay in Quarter One while we were paying rent and trying to pay 2014 taxes instead) is something I need to do while I have energy and am in the office. O also stands for home, just because the office is at home. For example, the toilet is not in the office, but it’s in the house, and we already have an H designation, so to remove confusion, I label it O.

You’ll notice that everything on the list is also an action. Unlike my old lists, which eventually devolved into “PO Box” and “Invoices,” this is a new and earnest effort for me to write everything as an action. I’ve actually written things about how to-do list items should be actions before, but I always felt like I was ‘too smart’ for that shit, and that I would understand what I meant. When, in truth, the whole point of a to-do list is to be able to give myself some guidance for when I’m too wiped out to think straight, let alone be smart. That’s something that Getting Things Done really helped to put into context for me. Because I am smart, I can anticipate a time when I will be overwhelmed or exhausted. Therefore, I will be kind to that future version of myself by clearly labeling and addressing the things that an exhausted me can do.

The T label has been the very most helpful feature of this new list. Before T, I would click aimlessly from tab to tab in my browser, glance down at my to do list, where useless nouns like “PO Box” stared back at me, and were too difficult to parse, so I would return to aimlessly clicking tabs again. This would go on for an hour sometimes before I just wandered out of the office out of frustration.

Other features of the new system you may notice:

The Physical Inbox – Is an actual box, an old periodicals holder that I bought at the thrift store for $0.99. I put a folder in it with the Someday Maybe list, along with anything I need to look at during my weekly business meeting. I also throw papers to file, and my mail in this box, since I frequently check the mail at the end of the day, when I am too tired to process it. 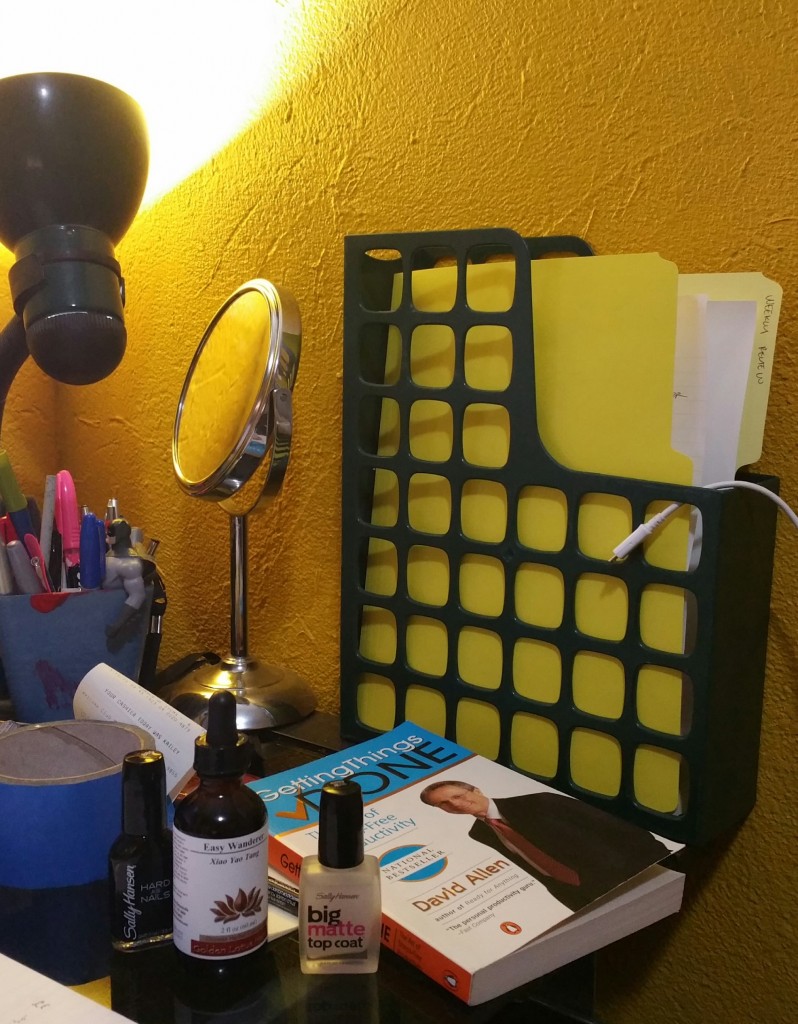 Tuesday through Sunday Week – I realized awhile ago that I was working seven days a week. My consulting week was Monday through Friday, and my tour guide week was Thursday through Sunday, with some consulting happening on the weekends, despite my best efforts. Even when I would try to relax and weekend Saturday and Sunday, I could only do that until 5pm on Saturdays and 7pm on Sundays. Unless I had meetings or other obligations, then not even that.

I also noticed that in order to fit into the old day-sectioned list, I stopped writing down anything associated with the tours, which created unnecessary stress. Now the tours have their own section on the list, and I honor the work I do by taking Monday off.

You may have seen me around on Saturday and Sunday. That’s because I’m not being strict about working on those days, It’s more about not feeling guilty or put-upon when I do work on those days, which is something I did before when I was trying to scrape together some off-time between tours.

10th Step – In this context, 10th step is a verb. In twelve steps, the tenth step is “Continued to take personal inventory and when we were wrong promptly admitted it.” I was talking to a friend on Monday night, and we decided that, instead of feeling self-doubt and causing ourselves undue stress at work over mistakes we may or may not have made, and things we should or shouldn’t do, we were going to start taking a work 10th step at the end of the day. So, at the end of the day, I’m asking myself four questions: 1. What did I do right today? 2. What do I wish I had done differently? 3. What does different look like? 4. How will I work toward my goal?

What did I do right today?

I didn’t feel a lot of stress today

What could I do differently?

I didn’t walk the dog today, and I wish I had.

I ate a granola bar for lunch and I know I should have eaten more than that.

An exercised dog would be less fidgety, and an exercised me would probably have gotten more done with a clear head.

If I were well-fed, I probably would have had more energy to walk the dog.

If I ate lunch and walked the dog, I probably wouldn’t still be working. I definitely have felt very foggy and distracted writing this post.

How will I work toward my goal?

I’m going to start by eating a good mid-day meal, it seems like everything else stems from that.

This way, I turn negative feelings of being unaccomplished into positive goals, and I bring some perspective to my day. Before I started writing that, the significance of the bad lunch had totally not occurred to me. Probably because my brain is still foggy from eating a shit lunch. In the notebook version of today’s 10th step, it says “less distraction?” and “prioritize self care.” Now that I’ve written that at the actual end of my day, I am pretty clear on needing to eat a better lunch tomorrow.

Sometimes the to do list, the Daily grid, and the 10th step seem excessive to me, but the truth of the matter is that I am expecting an excessive level of performance from my mind and body right now. It’s not always going to be like this, but right now, I am all of the staff I have, and I have to make every minute count as much as it possibly can.