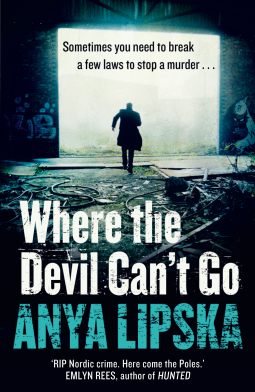 Where the Devil Can’t Go by Anya Lipska

This one may be my fault. I didn’t notice that the publisher preferred British reviewers until I’d already requested the book. But, since they gave it to me, I thought I’d give it the old college try. I got through 10% before I decided that it wasn’t for me.

I’m not British, so the specific London streets and neighborhoods the author mentions mean nothing to me, and without anything to describe them other than context, it just feels like the kind of name-dropping touring comedians will slip into their act to increase their popularity with the hometown crowd.

I once heard a guy from Jersey make a joke about turning left on Colorado Blvd. in a show at the Ice House in Pasadena, which just so happens to sit 20 feet from Colorado. Hey, that’s where we are. Everybody laugh. It’s a cheap way to establish a connection, and the trouble is, it only works on locals. This may be why the publisher preferred Brits.

If you want to see neighborhood name dropping done right, check out Joseph Hanson’s David Brandstetter series. It’s set in a version of Los Angeles that is half imaginary, half washed away in the boom of development in the 80s, but he manages to bring every street corner to life from the sewers to the clouds. LA is a character of her own in those books. I can’t say the same for London in this instance, although I know from other books that it can be done. See also Michael Chabon’s The Amazing Adventures of Kavalier & Clay for such a depiction of New York in the 40s.

The other thing that kept me from getting farther than 10% was the Polish. The main character, Janusz Kiszka is a Pol who immigrated to the UK as a young man. His shady Soviet past is eluded to, but not much is revealed in these first few pages. I loved Janusz. I wanted to keep reading just for him, but the sad truth is, love won’t keep us together.

I have a massive pet peeve for writers who try to communicate someone’s ethnicity or culture by making them slip in and out of their native and adopted language like lazy butterflies moving from flower to flower. I have never met a person who interchanges two languages in the same way that ethnic characters in books like these tend to do. Unless you count my great grandma in the later years of her life, but that was the dementia. She forgot Spanish and English were different languages.

Lastly, it moves damn slow. Janusz, for all his charm, is an old man. He does old man things, none of which are particularly exciting.

Then again, it’s $0.99 on Kindle right now, and if you’re into the slow burn and don’t mind learning some Polish, there’s absolutely nothing overtly offensive about this book. Which, now that I think of it, is probably the worst thing I could ever think to say about a book.

3 out of 5 stars: on account of being really fucking cheap, and more boring and annoying than actually terrible.