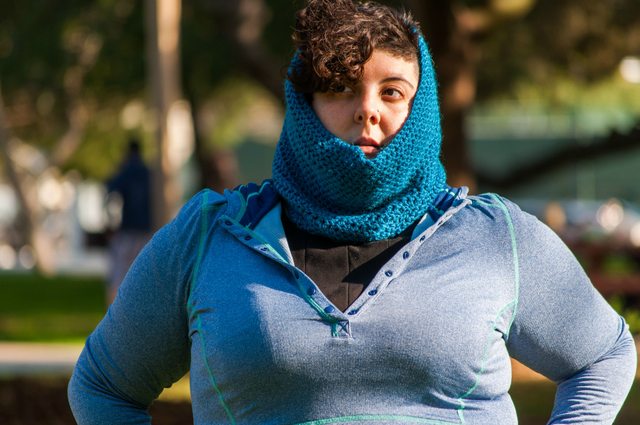 This morning I’m pretty sure I became someone’s story about how young queers are doomed because we have no idea of our history or our circumstances. A guy in the elevator looked me up and down, decided that if I wasn’t a lesbian, I was probably at least on the good side of the issue, and started to talk to me about something Justice Ginsberg said about skim milk. Since this happened during one section of one day of a court case the ruling of which isn’t even expected until June at the earliest, I had no clue what he was talking about. Then he tried to tell me about the differences in legal arguments between the DOMA and Prop 8 cases, and just as my eyes started to glaze over, he said his goodbyes and moved on. So, my apologies to any actual lesbians, I confess I didn’t even know the names of the two ladies who’s inheritance tax issue brought DOMA to the court’s attention. In the future I will endeavor to be better at walking around with short hair.

Blue Crochet Cowl by me, and you can buy it on my Etsy store
Hoodie made by REI
Calvin Klein Dress from Macy’s
Doc Martins from a shop that doesn’t exist anymore