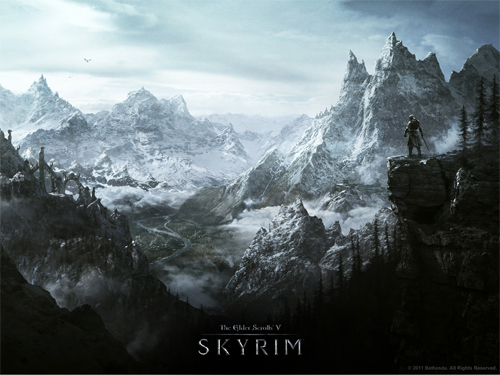 So remember about 5 months ago when everybody was talking about this great new game called Skyrim and wandering around saying things like “I used to be an adventurer like you, until I took an arrow in the knee” (maybe that was just in my house.) Well, I finally got on-board this week. You can call me whatever you want, just don’t call me on time for dinner.

Initially, what struck me is that Skyrim is a damn good looking videogame. I leveled my character up from 0 to 12 in one weekend, which seemed really fast for me. Especially since I stared at the TV so hard, I broke a blood vessel in my eye and had to tell everyone at work on Monday that it was allergies. (Allergic to not playing Skyrim!)

Combat isn’t as satisfying as in other games like Mass Effect and Fable. I do love the slow-down cut scenes in which you ABSOLUTELY FUCKING MURDER dudes, but I wish there were more than two versions. Although maybe there are more, and I’m just not good enough to see them yet. That wouldn’t surprise me. I don’t like that the aiming sights have to be focused on your opponent to hit them, and there’s no snap-targeting that I can tell. The fact that my controller had a derpy right thumb stick is no help at all.

What I really love is that I spent basically the entire weekend playing and I’ve barely scratched the surface of this game. Just walk in any direction and you will experience amazing views, and random game-play along the way. I wish there was some way to run faster or summon a horse like in Red Dead Redemption (sweet merciful God that was a useful feature.) I know you can buy a horse, but I hear they’re pretty stupid and if you accidentally leave them in some random place, they’ll stay there forever and unless you can find them, you won’t be seeing them again.

One thing that really bothers me is the companions sense of personal space. This always seems to be a hard trick for game developers, but in Skyrim it’s the worst I’ve seen in years. If I walk into a small room, they crowd in after me and then I can’t get out. It you’re struggling to navigate a small space or tight turn, the companion takes this opportunity to cuddle up to you and can literally push your character in the direction they’re going. I also dislike the fact that you can permanently kill you companion dead if you hit them in combat, but I love that the enemy can’t kill your companion dead no matter what.

I have a lot more playing to do before I form a concrete opinion about the game, but so far it’s going very well. At this rate, it might take weeks to even explore the whole map, let along progress the plot much. The realness and the details of the universe are definitely perks.