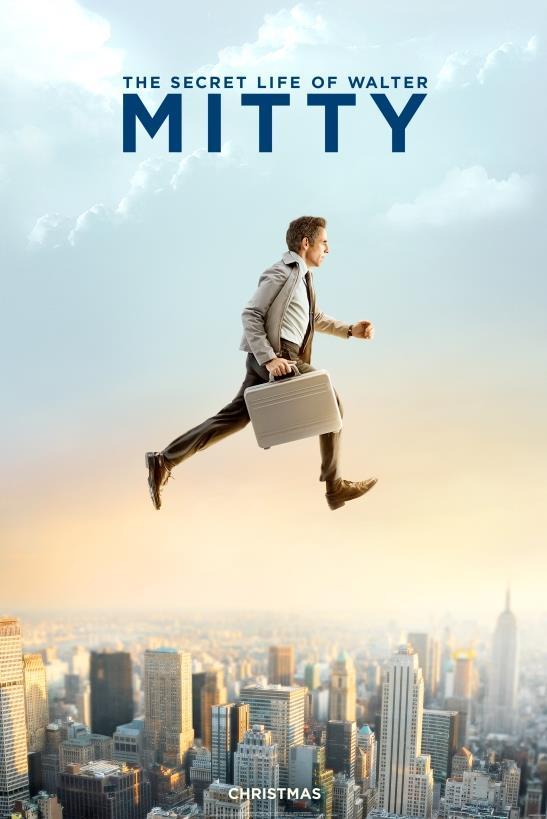 The Secret Life of Walter Mitty will feel a little bit familiar to those of us who are fans of Wes Anderson movies. A lot of the scenes roll out in a very Wes Anderson way, but at the heart of everything, the spirit is fundamentally different. Walter is a good man with an empty life, rather than an empty man with a good life. He’s the type of do-the-right-thing upstanding gentleperson we all like to think we are. He’s attractive, but in the Ben Stiller way, rather than the Brad Pitt way; or I guess I should say the Adam Scott way, since Scott does play his primary nemesis. Although, strapped uncomfortably into the beard equivalent of the Snidely Whiplash mustache, his good looks aren’t very apparent. In the film, Mitty is shown to have some money, but not much. I actually missed the close up of his meticulously balanced check registry the first time, but it’s probably about what the average american has in their own savings: $5,923 as reported in 2011. He wears average clothes, takes the average form of transportation (subway), and works an average job in a lower floor of a giant corporation. His kitchen chairs are knock-off designer, but his shelves are still 50% milk crate. He is made to evoke maximum relatability from all angles. And he does.

At some point in our development, every one of us has decided that all we really want is one small thing, or at most three things: A certain partner, a certain house, a certain job. I want a corner office, I want a man who doesn’t cheat or hit me, I want a little apartment with a lock on the door and a curtain in the window where I get to decided who comes over and when. We all want safety. Especially when we have had danger we didn’t request. I never base jumped, or did (too horribly) illicit drugs (knowingly), and yet I have been scared enough. I have been in pain enough. All I want is a little warmth. So I sit in my warm place and I dream of adventure, and I wonder why time seems to move so slowly.

If it wasn’t for disaster, how many of us would have anything close to the best parts of our lives?

I sometimes wonder when I’m going to get over being laid off. I’m not sure. It seems like such a simple thing. 127,820 other people were laid off the same month as me, it’s certainly not a unique problem, but it comes up from time to time, and it still really sucks. It’s almost funny. Unlike Walter Mitty, by the time layoffs were announced at my company, I was practically begging to be on the list, just to have it over with.

I call bullshit on Mitty’s lack of desperation. I call bullshit on Mitty’s co-workers’ lack of desperation. Yeah, there are a few lines with them all worrying about lay offs, but you can tell that Ben Stiller is a long, long way away from anything resembling the kind of bile-induced dry-heave situation that a person who spends 16 years in a windowless basement will turn into when the words “lay” and “off” are used in a SFW conversation.

Which is where Walter Mitty starts to lose me. This is the kind of movie that pre-lay off me would be positively enchanted by. I was still quite enchanted. There were entire scenes I spent on the edge of my seat because it was just that beautiful and uplifting and great. But the part where Mister Play-It-Safe decides not only to ride on a plane, but on a helicopter, a Greenlandish fishing boat, a DIY luge, volcano ash, and the fucking Alps just made me sad. It made me sad for two reasons:

One, because when I knew I was about to get laid off, I just cried. I cried and cried and cried. I frantically applied for the same job at 100 different companies and I didn’t get hired for any one of them. When I did get laid off, I sat in the HR office and I cried. Then I composed myself, ran down the hallway to the service stairs and cried some more. Yeah, I went home and launched my freelance site. By the following Monday, my entire operation was up like a circus tent. Big, and loud, and filled to the brim with flipping girls and apprehensive elephants.

I have been on defcon 8 million and three every single day since then. I suppose if I had to ride a volcano out of Eskifjörður (or wherever), it wouldn’t seem nearly as bad as all this because when one is fleeing a volcano, there are few options and all of them are action steps. In my own experience, when one is unemployed and trying to make a living as a freelancer, there are endless options, and most of them are not action steps. I find it nearly impossible to stop doing, or thinking about doing things. The uncertainty of it all is turning me into a crone. I curl into myself, and my doubt, and I rot away in an angry little ball of worry, calculation, and despair.

And two (yes, I nearly forgot as well) when I think of all this time I have wasted freaking out about something that will or will not happen, just as things all over the planet fail or succeed sometimes in spite of, or sometimes because of, all the effort and bull-headed workaholism that’s poured into them, I regret it. I regret the days I’ve spent in bed trying to recover from the mess I’ve made of my own head over this. I regret the days I spent, and still spend, in turmoil over my bank balance and my bills. I regret every lousy tear I cried for money, and title, and property in this life. There is wonder, and beauty, and opportunity that I have thrown away for my own bloated ego and The Secret Life of Walter Mitty reminded me of it.

So do I stop this shame spiral and come back to my real life, or is the concept of wonder just something the Ben Stillers of the world sit in overpriced Hollywood office suites and imagine that regular people have in their lives? The answer to that is beyond the scope of this movie review.

One Reply to “Secret Life of Walter Mitty Review”