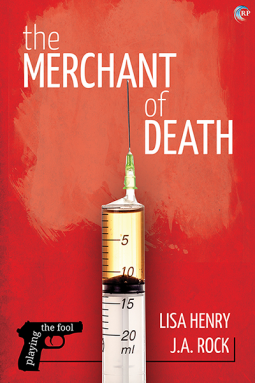 The Merchant of Death (Playing the Fool #2) by Lisa Henry and J.A. Rock

Thanks to Netgalley and Riptide Publishing for the review copy.

Book two of the Playing the Fool series was an absolute charmer. Henry Page, recently an FBI witness, has decided that something is rotten in the state of his twin sister’s adult care facility, and resolves to go undercover as her in order to figure it all out. As anyone would.

Mac, who started falling for the enigmatic conman in book one is quick to follow him down the rabbit hole, as it were. Or at least he would be if somebody wasn’t so busy framing him for murder.

The banter that was hard to round up in book one is on point in book two, as is the suspense, and the mystery. I no longer feel like Mac is making huge mistakes at every turn, maybe because Henry is so damn crazy that I’m just impressed he can hang on for the ride.

Henry in a dress turns out to be a major turn on for Mack, and the reader too, if my own experience is anything to go on. There’s also the signature Lisa Henry touch that takes a story just that much farther and makes it an impactful, humanizing scene rather than mere erotica.

In addition to their relationship heating up, we also get closer to a secret only hinted at in book one. The original trauma that set Henry on his dark path to begin with. Which just happens to be critical to solving the mystery of who’s framing Mack. The mystery of the hospital is a whole other bag of worms.