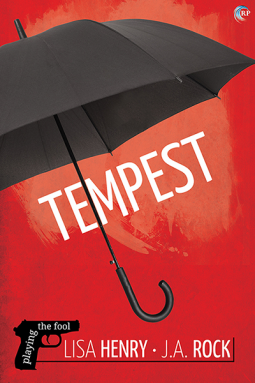 Tempest (Playing the Fool #3) by Lisa Henry, and J.A. Rock

Thanks to Riptide and Netgalley for the review copy.

In the third Playing the Fool book, Henry and Mack are on the run, from the both sides of the law. They have no one to turn to but each other, and Mac’s parents, who’s farmhouse they make into their hiding place. This is reminiscent of book one where Mack fails to plan and ends up in the one place anyone who knows him would look for his ass.

But I do like that it gives Mack and Henry some time to be normal people and not on the run or threatened by stuff for a second. I also appreciate that the authors spent time with Viola, developing her character and giving her an arc, rather than making her a plot device, as can sometimes happen with children and the developmentally disabled.

The book wraps everything up nicely in the end, which you guys know that I’m not usually a fan of, especially with a series I enjoyed as much as this one. It makes me very doubtful that there will be a book four, which I very much want. By the end of book three, their White Collar thing is totally in place, and it looks like Henry and Mac are going to have a beautiful partnership, both in and out of the bedroom.

I’d really like to see more of the series with them solving crimes and actually being on the same side. The banter that gave me pause in the first book is completely on point by book two and stays that way through book three. If anybody reading this knows Lisa Henry of J.A. Rock, or the fine people at Riptide, let them know that a book four would be much appreciated. By me, but I’m sure by lots of other readers as well.