Happy 4th of July. To celebrate America’s independence, I’m reposting an old blog from March 22, 2008, which wasn’t actually written in 2008, but was probably written sometime in 2007 since it was for a class at a college I graduated from in May of 2007.

This was an assignment for my African American Literature class. We were told to write about our first memory of race in a non-linear way.

Race? I’m thinking in the shower. Shaving your legs is so gross-it’s totally just another way for the autocratic beauty industry to tell women that our bodies are in need of discipline. It’s a phenomenon that goes back thousands of years like how orthodox husbands can’t touch any women but their wives, and not even then when she’s on her period. Feminism is about being able to do what you want anyway.

So I do what I want and I shave my legs in accordance with the beauty autocracy. Do you know that I never actually had real leg hair? You know how there’s two kinds of leg hair, the little kid kind and the grown-up kind. I bet that’s every woman in the western world. Gross. Why can’t capitalism give me back my leg hair? I want all the leg hair I’ve ever shaved off right now. I want what you took from me. Lately I’ve been thinking a lot about lotus feet, especially when I shave my legs. I always wondered why they didn’t just cut off the women’s feet completely and put little shoes on their amputated ankles. Oh that’s a horrible thought. I feel sick. That should really be deleted. Maybe that;s just too much subjugation. How is it that we always think we know when to stop? After six years of constant orthodontia they tell me I’m not good enough yet. We want to create a hairline fracture in your upper palate and expand the bone plate a little every month. I started crying. Upper palate? That’s my face. You want to break my face. They make midgets do that to their legs. My face is like a midget leg. Fuck. I’m supposed to be talking about race. My grandmother jokes that I’m not a real Mexican because I don’t like spicy salsa.

You’re not supposed to say midget anymore. You’re supposed to say little person. Am I avoiding the subject of race? Possibly. I have no idea what to say. I think I had bigger problems as a kid. I wasn’t from the most tranquil environment if you know what I mean. But midget is a legitimate term. It applies to all adults five feet tall or under. My friend is a midget, among other things. Is it arrogant to suggest that I had bigger problems as a kid? That I was some sort of anti-racist messiah? Maybe I was just way too concerned about real shit. Everyone knows that race is just a social construction. Maybe it’s the bi-racial thing.

Once I was watching In Living Color with my dad and the Waynes sister came on and she was dressed like a little kid, and her mom was a maid, and she had a monologue about how in black world you mom doesn’t have to be a maid, and how in black world everyone likes you and and and you get new dresses everyday or something. I thought it sounded good. I’ve always wanted to live in a world where my mom is different than what she is and I get whatever I want, which is basically what the television tells me I want. Kim Waynes, we should hang out. Right, race. I’m getting sleepy. I can’t think about this. My dad once told me that we were the only family that he knew that drank cool-aid after the kids grew up that was not black, and by we I mean them, his family. I wasn’t allowed to have cool-aid. So cool-aid belongs to black people and my dad is drinking it on the sly. What do they need it for? What is it about cool-aid that makes black people drink it? If only black people drink cool-aid then why do you drink it too? Because he had black friends in high school. And that’s not what he said, he said that the predominant amount of people who drink cool-aid after childhood are black, but we do it too. It’s funny because we’re a statistical outlier: drinks cool-aid, over eighteen, not black. I mean them, not me, I wasn’t allowed to have cool-aid. I didn’t even especially like it.

Hey guys, it’s me, 2012 Marina here. I felt bad that this blog didn’t have an image, so I google image searched “leg hair” and I found this: 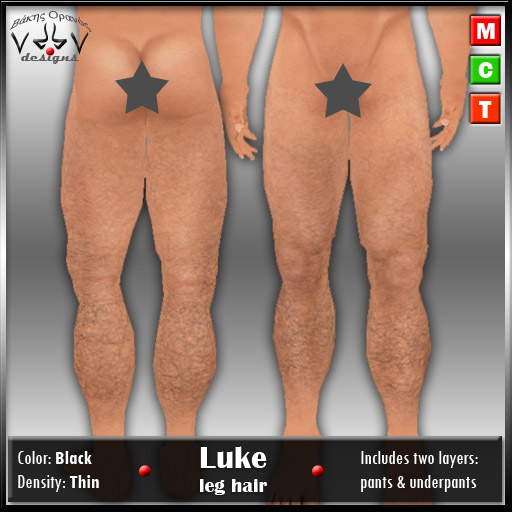 Apparently it’s from a company that sells body hair mods in second life.

One Reply to “RACE RACE RACE”