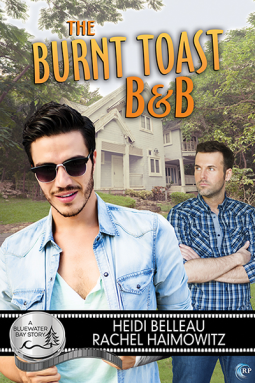 It was nice to see both Belleau and Haimowitz again. After my 5 star review of Bliss, which Belleau co-authored with one of my faves, Lisa Henry and Haimowitz’ cereberal slave/master piece, Anchored, I was really geared up for a good performance in book 5 of the Bluewater Bay series, which I’ve enjoyed so much.

And it totally delivered.

Burnt Toast isn’t my absolute fave BB book, but I was really happy to see a major title with a trans lead, and a story that didn’t shy away from the tensions, both psychological and personal that come up when a narrow-minded thinker is challenged to be greater than they are by the people and situations in their life.

Butch ex-logger Derrick has some deep seated issues with his own masculinity, born of a seriously internalized homophobia. So when he inherits his parent’s beloved Bed and Breakfast, the idea of making nice in a stereotypical gay paradise is beyond him. As the B&B falls deeper into debt and disrepair, he decides he’s done his filial duty, and it’s time to close up shop.

Fortunately for everybody, sassy stuntman Ginsberg, who you may recognize from the first Bluewater book, Starstruck is here to save the day. Except it looks like he’ll be ruining it first.

Derrick wants Ginsberg out of his house so he can sulk in peace, but he’s too polite and repressed to tell the kid to fuck off, especially after Gins says he’s trans. Derrick may be a grumpy bastard, but the last thing he’d ever want is for anyone to think he’s transphobic.

For his part, Ginsberg can’t get a read on the moody proprietor of his cheap new digs. After breaking an arm on-set, he needs to lay low and recover without expense. He knows more than anybody how quickly a sure thing can turn into a shit sandwich.

The sexual tension is amazing right off the start, but for a man who considers himself a fierce, self confident queer, the overgrown, underdeveloped Derrick is a little bit outside of Ginsberg’s normal level of acceptability. The fact that the man seems to go from nice, funny, and charming in one second to sub-verbal cave-douche the next is both annoying and frustrating.

Derrick finds himself thinking of Ginsberg all the time, but when it comes to the guy himself, he’s all elbows and thumbs. He completely ignores the shit Derrick means to be offensive, and takes offense to the shit he considers to be regular human interaction.

Can Ginsberg overcome his history in order to give Derrick a chance? Can Derrick trash his heteronormative hypocrisy in order to win the man of his dreams?

The only part of this book that didn’t make it my fave in the series is that Derrick really reminds me of myself sometimes. My own weird butch shit made me hate Derrick like cold fuck, but my love for Ginsberg and the supporting cast made me stick around. Also, I wish there was more sex, but Bluewater Bay books don’t usually have a lot of sex scenes anyway, so it is in keeping with the series.