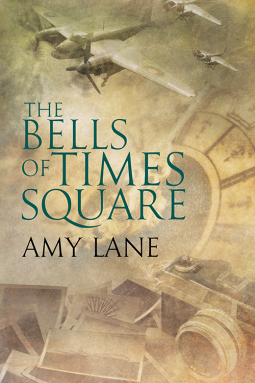 The Bells of Times Square by Amy Lane

Thanks to NetGalley and Riptide Publishing for the review copy. The Bells of Time Square will be available for purchase on December 15, 2014.

Reading this book, I was reminded a lot of Rupert Smith’s A Man’s World, mentioned briefly in a long-ago post on decent gay erotica that this review series is doing it’s damnedest to both capitalize and expand on. Like Smith’s book, Lane’s narrative switches back and forth between World War II and a modern setting, and both books deal with a gay couple in each setting, connected by history and proximity. Aside from them each being poetic love letters to our gay grandfathers (both literal and figurative), the similarities stop there, but I couldn’t help comparing them, as they are both very moving.

I’ve been listening to several of Amy Lane’s audiobooks lately, which I haven’t reviewed because if I reviewed non-NetGalley books, this fucker would be two posts a day of nothing but book reviews, mostly erotica, and I don’t think even you guys are up for that. I’m not, that’s for sure. But I digress. All I wanted to say is that I’ve been enjoying Amy’s other works, so was pleasantly surprised to see her name attached to this book.

This is a beautiful and heartbreaking story of love and loyalty though the ages. Nate Meyer goes to Times Square every New Year’s Eve to listen for the church bells he had promised his war-time lover they would one day hear together. The Bells of Times Square takes place in present-day, with Nate struck mute from a stroke being pushed to Times Square in his wheelchair by his grandson Blaine and Blaine’s boyfriend, but the majority of the narrative is set in occupied France where Nate and his lover Walter found peace and understanding in the midst of the violent terror of war.

Walter was a poor, uneducated man, experienced both in love and fighting when camera operator Nate literally fell from the sky. Tending to his wounds in an abandoned house deep in enemy territory, the two quickly form a bond that each man knows to be true and abiding love. And yet, Nate travels to Times Square alone year after year. Long after he’s married and has children and then grandchildren of his own, he spends one night a year with the man he once promised his life to.

This is the story Nate would tell his grandson if only he could. It’s about devotion, and being true to yourself and your heart, in whatever way that’s possible. It’s about the ways that duty to country and to family can be at odds with duty to self, and the things we do to honor all masters in a world where nothing is as simple as it seems.

In this present our grandfathers and grandmothers built for us, where you can be a lover and a fighter, where a man is judged more by the content of his character than he ever has been before, what would those grandparents have us do with the gifts they cut for us from the live, bleeding heart of the past they came from? It’s a beautiful question for a beautiful book. I cried like a bitch, I can tell you that honestly.

4.5 stars out of 5 because sometimes the transition from past to present and back again can make a person a little bit cross eyed, which I can say is a habit the author has based on other of her books that I’ve read.