My name is Marina Rose Martinez, I came into this country on January 14, 1985 at 5:52 p.m. at the Little Company of Mary Hospital in Torrance, California. My parents are Sue Ling and Michael Frank Martinez, and they both arrived in the US in a similar manner: as newborns.

My dad used to be a smoker, and he has told me the story of how he went outside the hospital for a cigarette, and as he was smoking he watched the sunset and knew that his life was forever changed. Standing in California, where he was born, and where my mother was born, only 30 miles from Altadena, where they both went to John Muir High School and hung out on the lawn of the Altadena Library, only 6 short miles from the Pacific Ocean, which would be my first swimming pool, my father looked at our setting sun and contemplated my life. Not as an American, but as his child on this planet.

For thirty years I lived in California where my parents, grandparents, and great-grandparents all lived and where most of those that are dead have died. Last year I moved to Oregon, and this year I made the grievous mistake of trying to sign up for health insurance.

I’m an independent contractor, which means that thanks to Obamacare, I can get my health insurance from the state, rather than an extremely expensive private alternative. When I signed up for Covered Oregon in 2014, it was a breeze. I understand that not everybody felt that way, but it worked really well for me, and I was happy paying about $160 a month for my “bronze” level coverage.

In November and December, we all got a lot of letters and emails, as well as billboards, commercials and radio announcements to the effect that Covered Oregon wasn’t going to exist come January 1, 2015, and that we all needed to go to Healthcare.gov and re-apply for the same healthcare coverage that we had before. Low and behold, my insurance was now $190 a month for the exact same plan. I wasn’t not okay with that, so I switched to a slightly different plan that, dental included, only cost me $180 per month.

In January, I receive my first letter from Healthcare.gov, dated Dec. 12, 2014. My citizenship is in question, and if I don’t send them a copy of my official birth certificate, I may be removed from Healthcare on March 17. Being born in the county of LA, one learns that any government process is going to take 6-8 weeks. This means that by the time I request my official birth certificate from the County, receive it, and mail it back out to the Healthcare Administration, my health insurance will probably have been cancelled.

This is not cool with me. I have endometriosis. I need my birth control prescription in order to function. Otherwise, I will be spending half of every month in extreme pain. Throwing up all over yourself on the floor pain. Naturally, a threat to my insurance is something I take really fucking seriously.

So I call Healthcare.gov and I ask them for an extension, owing to the fact that it’s going to take two or more months to get the document they want. I also ask them why I’ve been selected to prove my citizenship. They don’t know what’s going on, they aren’t sure what letter I’m referring to, and they can’t help me. They tell me to call back the next month. Meanwhile, I order my birth certificate and dutifully wait for it to arrive.

February comes, and I have no birth certificate and one month until I loose coverage. The man that answers the phone this time is far less helpful, which is really saying something. Right away, he assumes that I am some nefarious illegal trying to scam his great white government into taking my $180 every month. As before, I ask him why I was selected while my boyfriend was not, despite the fact that he applied for coverage at the same time from the same house. He says something to the effect that my boyfriend’s immigration status isn’t relevant. Like mine is? He finally says that my application flew up a red flag. I ask what that was, and he says that he can’t tell me because it might compromise the investigation.

During the great depression, the US Government engaged in a campaign called Mexican Repatriation in which agents drove panel trucks through our neighborhoods and literally caught people like stray dogs, who they then drove back over the boarder and “released” in a country they’d never known. When it was finally over, 2 million people were ripped from their homes. Families were torn apart, communities disenfranchised, and many never made it back to America. So when an agent of the US Government, no matter how lowly, starts to talk about “investigations” into my right to be here in my own country, I get a little itchy under the skin. I repeatedly ask him to tell me what investigation he’s referring to. He repeatedly refuses.

He suggests that I return to my point of entry if I want healthcare coverage. I suggest that he’s being a racist, and he threatens to hang up on me. Over and over, I ask to speak to his supervisor and every time he refuses. He tells me he has no supervisor. He advises me to send in a copy of my green card.

I call back again in March, which is when I receive and send a copy of my birth certificate express mail to London, Kentucky. I call back in April and in May. During this time, I keep getting monthly letters telling me that my coverage is threatened and that they will be cancelling it on March 17, 2015. The February letter asked me for proof of income so I sent my P&L statements for a year, which costs about $20. After that, every other letter still asks me for proof of income or proof of citizenship, while the rest claim that my “documentation” has been received. Documentation of what, they do not say. 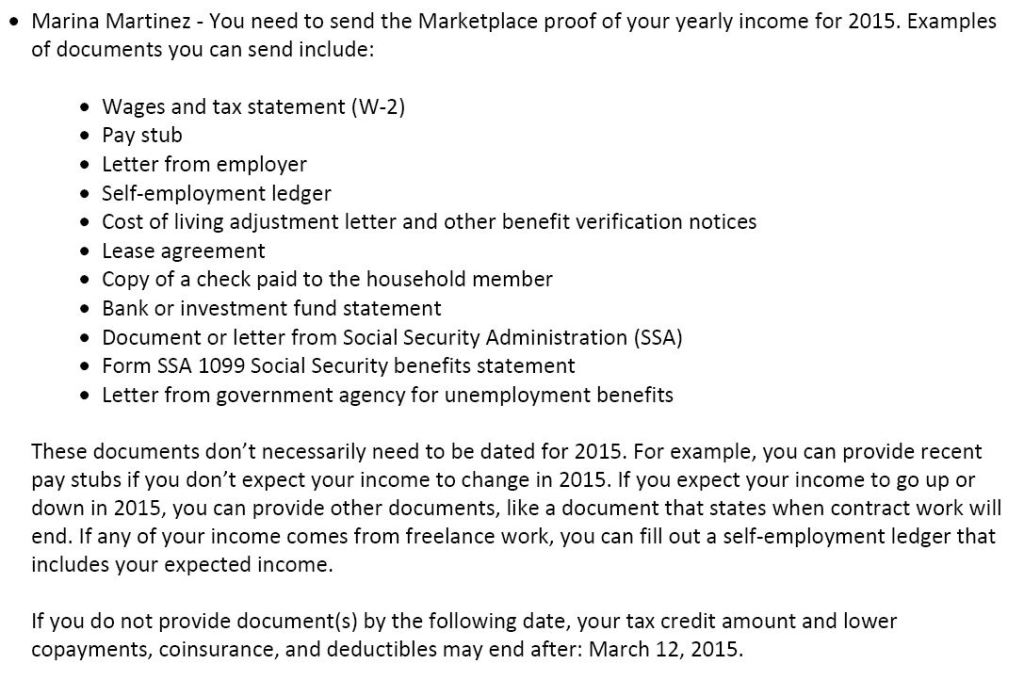 Through the months, I find out that the center in London, Kentucky is not the same as the call center. Call center employees have no way to trace what’s happening in Kentucky, or even to contact anyone there. Despite the fact that letters with a return address in Kentucky tell recipients to call their hotline in order to follow up on anything sent or received from the address in Kentucky, no one in the call center has any access to anything coming out of the Kentucky center and visa versa.

Things finally turned up for me in May when I called the center on my now-monthly update call and received the first and only friendly helpful person to date. I told him my story, reiterating that I just want to know if I still have heath insurance or not.

“Why are they questioning your citizenship?” he asked.

I almost launched into what I had come to consider to be my line: a polite response to being told that they can’t help me, when it struck me that this person was actually asking me a question. And a good one.

I told him about my cryptic conversation with his colleague, and the shady “investigation” that’s apparently ongoing as a result of me trying to get health insurance. He thought that was odd. I agreed. He pulled up my account, which I have to assume no one else did, because he immediately said “your social security number is wrong.”

Apparently, the red flag was that the social security number in my application was not bringing back any information on Marina Martinez because it wasn’t mine. I had stupidly taken advantage of my “free” healthcare agent, and asked her to process my information. I remember thinking it was odd that she didn’t verify any of the numbers I gave her over her extremely shitty phone connection, and I really should have said something about that, but I was so relieved that someone else was going to take care of the tedium of signing up for a government program that I blindly ignored this.

My friendly and helpful phone center person put in the correct social security number, said “Oh, there you are” and just like that I was an American again. 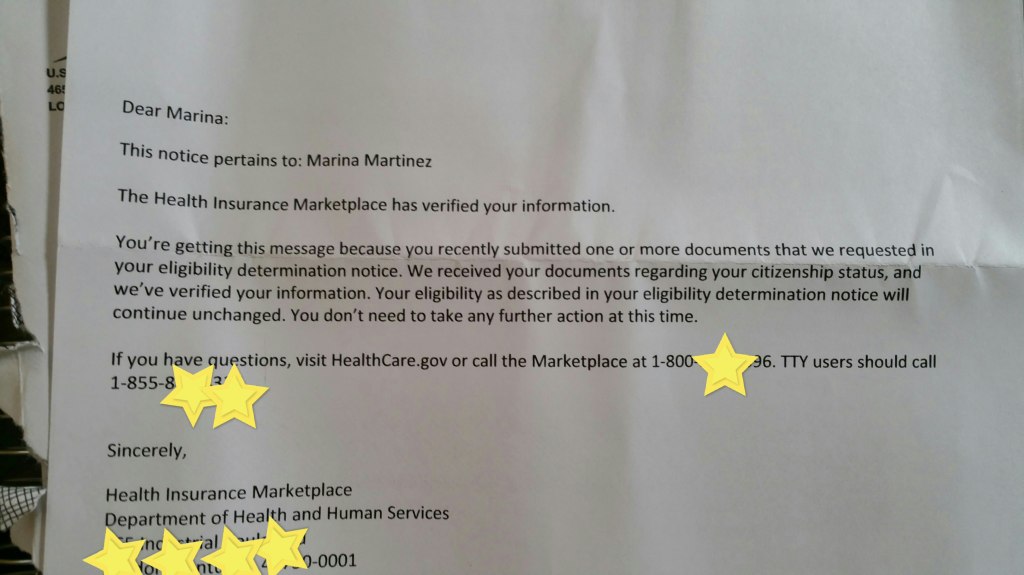 At this point, I don’t even care how little sense that makes.

2 Replies to “No, YOU Go Back to Your Point of Entry!”