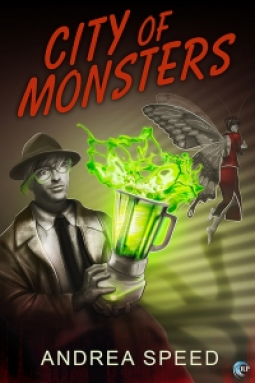 City of Monsters by Andrea Speed

Thanks to NetGalley and Riptide for the review copy. City of Monsters will be out August 11, 2014 in My Haunted Blender’s Gay Love Affair, and Other Twisted Tales

This short story is one of three haunted comedies to be published as a set. Main character Hunter is a man in a depression. He’s an underemployed private eye with a gambling problem, and a pesky ability to shift into an as-yet undiscovered animal form (he’s never let anyone watch, and he himself can’t remember the shift) who’s hot on the trail of a reverse tooth-fairy when sexy journalist Sakari turns an already bad day slightly more interesting. Maybe too interesting.

The eponymous blender (unless the other two stories also have haunted blenders) makes it’s appearance in this story, and while I like him, I wonder about his potential for comic relief. The story itself has more silliness than hilarity, which isn’t to say it isn’t fun. I do wish that there was more time spent on the pulpy bits, but as there wasn’t. It’s still an alright little short, although 3.99 is a little pricey. Minus one star for being kind of expensive.

3 out of 5 stars for having nothing wrong with it whatsoever.