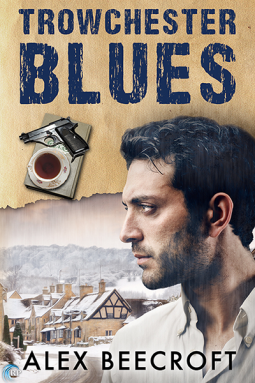 Maybe it’s because I’m getting up in years myself, but I really prefer the stories about the above-thirty set. Kids are dumb, and their problems are dumb problems. Not like the main characters in this first Trowchester Blues novel, the start of what promises to be hit series from Alex Beecroft.

Michael May was a police officer. One too many gruesome murder scenes sent him over the edge, and he was encouraged to take early retirement after assaulting a suspect. Back in the home where he was an outcast among his peers, and a victim of his father’s abusive cruelty, he is attempting to rebuild. What, he doesn’t know.

Fintan Hulme was a fence. A good fence, but he got out of the game and exiled himself to an antique bookshop in a tiny tourist village on the English coast. Content to live out his quiet retirement, he was completely unprepared for a new love or an old associate to show up at his door at virtually the same time.

Throw in a snarky orphan, a genderqueer, age-appropriate BFF (and maybe more) for her to bond with, excellent character development, and just a hint of sadomasochism and you have a pretty great combo. And that’s not even accounting for the very English mystery to top it all off.

Michael is afraid of his own anger, Fintan is aroused by it. Michael is adrift on a sea of uncertainty, Fintan knows exactly what he wants but his past isn’t going to let him have it.

The stand-out feature of Trowchester Blues has got to be the character development. It’s so crisp and good, even minor characters are real and whole people.

In terms of complaints, I only wish the sex was a little spicier. Fintan’s masochism is talked about, but not explored to the extent that I was hoping for. Vanilla readers, the kind who can be put off by the more hardcore pain/pleasure stuff will probably be grateful the scenes don’t go far, but they felt anticlimactic to me. I did, however, really enjoy that Fintan’s masochism didn’t automatically translate into submissiveness. All too often the two are portrayed as being practically the same trait, and as a masochist who likes to be in charge, it was refreshing to see somebody with a similar style.

4.5 stars for being a damn good read.