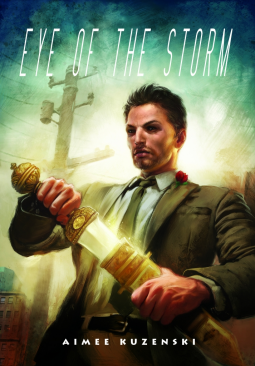 Eye of the Storm by Aimee Kuzenski

Imagine if the spirit of war, an ancient force as old as human sentience itself decided to jazz up his act, and here you have the premise for Eye of the Storm. The character of War is characterized by Alexander Sekhmet, an extremely old fashioned gentleman who is ambushed by an old enemy and must get with the times, or be left behind.

To that end, he seeks out and steals the body of lieutenant Camilla Sykes, a woman who probably would have been the next Patton had she a penis. Instead, she gets nominally rewarded for her battlefield bravery by being shunted off the front lines and into the West Point faculty, where she has been languishing in the army equivalent of Freshman English for the last five years.

The bold new choice of both a woman, and (maybe probably) a lesbian let Sekhmet out-maneuver his enemies, who are stuck in the dark ages, and lack the benefit of Camilla’s thirst for victory. As enemies are want to do, Sekhmet’s foe is forced to chose a similar power up, and the two gods face each other in the brave new cavalry contest that is participatory body-snatching. All the while the rest of their pantheon looks on with everything from mild disinterest, to open hostility, to abject terror.

Eye of the Storm was a quick, fun read. I found it a welcome distraction, and I honestly came to like all the main characters. This being the first in a quartet, I look forward to the following books, and I am genuinely interested in what happens to everyone as we move along.

The thing I like about books like this is that they don’t try to be more epic than they are. We’re already dealing with ageless, timeless Gods who are both the horsemen of the apocalypse and every variant god or spirit who ever came afterwards, plus some other mythical creatures and urban legends thrown in for good measure. I know that making Gods into people is a trick as old as Neil Gaiman, but it doesn’t mean it’s easily done. It takes a certain humbleness of character, an acceptance of the inherent silliness in writing about deities that a lot of authors are just too full of themselves to achieve.

But Aimee Kuzenski knows what this is. It’s gods and goddesses sniping at each other interspersed with epic fights, and empowering realizations about self, and intention, and reality. Or whatever. This isn’t a hard book to read. I don’t feel the weight of the centuries of deities on my shoulders when I open the Kindle app. And that’s the way it should be. I’ve ready enough books with supernatural forces in them to know when somebody’s laying it on a little too thick. This isn’t one of those times.

At $3.99 for 154 pages, this is a cute little novella that will not be depressing, boring, or overly moralistic.

4 out of 5 stars for overall goodness.