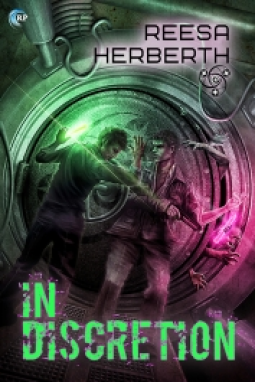 In Discretion by Reesa Herberth

Thank you to NetGalley for the review copy of this book, which you can purchase on the Kindle store for $3.99

To say that the quality of books on NetGalley is diverse makes it seem like you’re just as likely to get a winner as you are to get a stinker. There’s a reason they give these out like candy to any sad sucker with a blog. But I’ve never been one to look a gift book in the mouth, and sometimes I want to review something higher than I normally would just because I didn’t pay for it. But you’d have to.

On the other hand, if $3.99 has your checkbook hurting, then you have much larger problems than mediocre space romance. Which is what In Discretion is. The writing itself isn’t what makes it mediocre. In general, the language is what kept my interest when everything else was getting annoying.

The first issue I had was with the premise, part of which is that Romantic Lead 1, Thanson Nez is in an elite guild of space hookers/spies that people hire as space hookers, even though they know that they are also officially organized spies.

So, if you were planning to overthrow the galactic government, like some evil baddies in this book are doing, why in the sweet hell would you hire a hooker who you know is also officially a spy for the aforementioned government, and why would you further make the information about your evil plot readily available to him? Because the first scene pretty much establishes that it’s common knowledge exactly what kind of arrangement the space hooker guild aka The Discretionary Service has with all their clients. This is part of a series, so maybe this weirdness is addressed in a different book, but it made no sense to me.

The second issue I had is that I could not, for the life of me, keep track of the difference between Romantic Lead 1, Thanson, and Romantic Lead 2, Kazra Ferdow. As far as I could tell, they basically look the same, talk the same, and are from the same home planet. One of them had a criminal dad, one of them had a law maker dad, and at some point one boy threatened to murder one dad while one other dad, or maybe the same dad, forced the other boy off planet under threat of death. Whose death also is unclear. Thus establishing their star-crossed and confusing history. A general lack of descriptors paired with vague blocking (where people are in rooms, on pathways, etc.) makes all the characters sort of blend together almost like it was a stylistic choice. To be honest, it didn’t bother me as much as it might from a more complex story.

The simplicity of In Discretion really takes the edge off its other issues. The story moves forward with Frogger-like doggedness (froggedness?). The main plot is almost literally a straight line, following the ex-lovers on foot through a damaged space-station, from a cargo bay to a control room. But as they dodge zombies (yeah, zombies) on their journey to the center of the station, they also journey to the center of their own hearts, and what they find there turns out to be each other. Can love be requited? Can the trauma of that thing one of their dads did to one of them, which one I’m still not sure, be overcome after all these years? Yes. The answer to all those questions is yes, and easily.

This is sort of a Hansel and Gretel story if Hansel and Gretel where dudes very much in love with each other, the wicked witch was kind of crappy at witchcraft, and the gingerbread house was soggy so the walls could be punched through with minimal effort. Ironically, the reason this book is like this is, in part, because the main characters are level-headed pragmatists who generally do the most appropriate thing. Even the sex is pragmatic. There’s one scene, it takes place at the end when everybody is safe, and it’s full of really honest, beautiful things you’d say to your long-lost lover if you found them again on a zombie infested space station and realized you still loved them, and moreover, forgave them leaving.

I read this at the height of a head cold, and it was kind of nice to have something that was well written enough (not technically, but artistically, if that makes sense) that it carried itself without being too stressful or dramatic at any point. It avoided every major faux pas m/m kindle romance usually falls into, and it’s only $3.99, for the cheap ass bastard in all of us.

Adjusted for price, and in comparison to the other shit that clutters this category: 3.5

Note: Although this book is technically in the Ylendrian Empire series, the series itself can be read in any order, and this is a spin-off novella, written over two years after the other two books, and without usual co-author Michelle Moore.