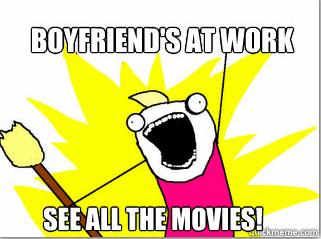 Melanie and I used to work at Blockbuster together, so I’m not actually sure if she means the movie reviews I used to give in the store or the movie reviews I have written here. They are very different. I think because I’m not surrounded by movies all the time anymore, I can’t give the kind of review I used to be able to. Back then, I could say something like “If you liked ‘Do the Right Thing,’ and ‘Waiting to Exhale’ but you thought it needed more ‘Big Momma’s House,’ The Madea movies are for you.” Customers loved them. I had fun too. I honestly wish I had more time to be on top of movies anymore. I talked about going to see more movies in my post about things to do when Ben is working. He’s not on the crazy schedule yet, but I have a feeling I know which activity will come to the top of the list.

As for movie reviews, I do not disappoint:

This is the best superhero movie I’ve ever seen. “But Marina, I thought you loved Batman, and I don’t see Batman anywhere in this film, I mean it’s not even the same publish–” THE FUCKING BEST. I know what I said, and I know what it means to my one true love, Batman.

It means he has to lose the gravely voiced scarecrow and bring back Michael Keaton. “Dark Knight, what can I say, you’re not the same man I fell in love with.”

Actually, I first fell in love with Adam West Batman, but his time is passed and I think we all know we can never bring back that level of magic. Not with all the shark repellent spray in the universe.

Will I see it again? Hell yeah. Let’s just say that you’re not an American if you don’t see this film. It’s everything we stand for: Hot dudes, marketing, and begrudging alliances based on mutually assured destruction.

I rented this thinking that it would be Fear and Loathing in Las Vegas with more hair and better costumes in front of cuter extras. I was sort of right.

The film, for those who don’t know is an autobiographical fiction about Hunter S. Thompson’s early career, his journey to find his voice as a writer, and his purpose as a man. In the sense that everything is fucking beautiful in this movie, my anticipations were correct. In the sense that this would be like Fear and Loathing in any way except that they are two stories ostensibly about the same man, I was wrong.

Where Fear and Loathing is madcap, funny at parts, and infinitely tense, Rum Diaries is slow and meditative, bordering on navel gazing. If I didn’t like Hunter S. Thompson so much I would have been bored. Fortunately, I love Thompson, I think his writing style, his diction, and his vision are amazing. I appreciated seeing this earlier, more relatable version of him, trying to find purpose in a purposeless world.

Watch this if you’re a Hunter S. Thompson fan, or if you appreciate casual period films about drunks in tropical climes.