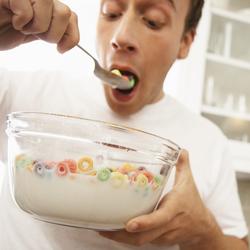 I hate breakfast. I don’t like to eat in the morning, it makes me ill. Although if I don’t eat in the morning I have a sort of bad day. So I eat late in the morning, sitting at my desk at work, usually the same thing every single day. For the past several months I’ve been eating a concoction of oatmeal, walnuts and dried cranberries. I like it because I can make it in a paper cup, eat it with a plastic spoon and toss the whole thing when I’m done. America!

My sweet boyfriend Ben loves the breakfast. Pancakes, mostly. We go out to breakfast at the same rate that we go out to dinner. I usually get an omelet. Omelets aren’t like other breakfast foods. They’re like handroll quiches. Also, they have veggies. Breakfasts are usually devoid of veggies unless an omelet is concerned.

I mean, I get the idea of putting sugary fruit at the beginning of the day and reserving vitamin rich veggies for the end. No need to excite the palate and the blood so late in the day. Can you tell I have a British film playing in the background, as I write this, because it seems painfully obvious to me.