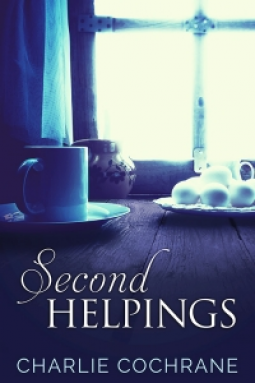 Stuart is still recovering from the death of his partner, Mark while Paul is struggling with the long distance relationship equivalent of lesbian bed death: cell communication blackout. When Stu’s dad and Paul’s mom become an item, Paul suggests they meet in order to suss out the character of his possible new step brother, he ends up sussing more than he bargained for. Is Stuart really ready to be over Mark? Does four weeks of no texts from Ben really qualify as a break-up? These are the kind of important live questions that are asked and then answered in Second Helpings.

I ended up calling the two main characters in this book Not Ben and Not Mark. As far as I could tell, every conversation they had was about their exes. When they first meet in the pub to sniff each other’s butts, it ends in a big growley huff. They seem to bicker at the drop of the hat. I got the impression that the writer was wondering how two men in such different places in life would possibly get along, and in the end it seemed like she didn’t really know. So the characters, being thrown together without an essential spark, turned to bickering to fill the void.

I did like all the Britishisms. For some reason everything seems more clever when written with an English accent. I also liked the setting and the premise. I wish that there had been more character development.

At $3.99 it’s not bad if you’re looking for something to knock out before you go to sleep, but I can’t recommend it over other similarly priced books. For example, the works of A.M. Arthur would be a better bet.