For every guy that has a “friendzone” story, there’s a girl out there who has a story about “the friend guy.” The friend guy is a guy who pretends to be your friend in the hopes that you will sleep with him. He’s not just a nice guy, or a polite guy, or an actual friend who wouldn’t mind sleeping with you, because I’ve had those as well and none of them are The Friend Guy. TFG is a guy who says things like “you know I’m here for you” when you tell him you had a hard day at work, and it’s not even serious, the printer just jammed it’s not like your mom died but he wants to take you for coffee and “cheer you up” when anybody who actually knew you would know that “a hard day at work” means I’m turning off the lights and hacking / shooting my enemies heads off for at least 3 hours while I imagine that each one is the printer that wronged me. TFG says things like “I know you” when he DOES NOT KNOW YOU AT ALL and probably never will, because whenever you talk to him all you can see in his eyes is a running calculation of how much more of your shit he has to take until boobs. Which is a completely horrible basis for a friendship as well as a crap active listening technique.

Kind and polite women will do things like say “oh I never could, we’re too good of friends” when TFG says inappropriately sexual shit in an awkward and skeevy way. What they’re really saying is “stop talking to me, I will not have sex with you and I suspect the delusion that I eventually will do is the reason you’re still calling me.” The reason women with any kind of social graces whatsoever will not say the second version and save themselves and everyone a lot of creepy trouble is the chance we might be wrong. The first time I kissed my boyfriend, I thought he was just being friendly, because hot guys that I like never like me back, so his tongue in my mouth must be some fun little thing Oregonians do.. Kurt Cobain kissed a lot of people, he was from the Pacific Northwest, wasn’t he? People are wrong about people all the time, and they do stupid things about that and it’s awkward and tragic. 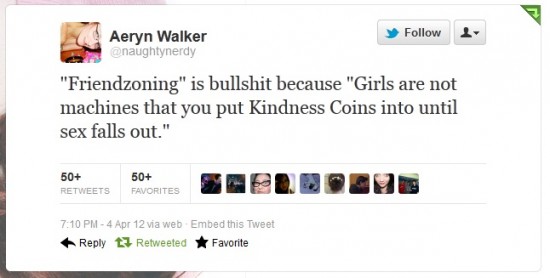 Why am I writing about friendzoning on a video game website? Because of “kindness coins.” On Wednesday April 4 at 10 after 7 p.m., Aeryn Walker tweeted “Friendzoning is bullshit because girls are not machines that you put Kindness Coins into until sex falls out.” And about 5 days later, Balimund the blacksmith in Riftin comma Skyrim wants my gay Orc ass because I gave him 10 fire salts. For 500 gold worth of magically flavored spice, this man would give me his life, and move to my crap house in Whiterun and make me food while my dumb followers hang around and get in the way. Of course, I said yes, because that’s how love works. I got my own real life boyfriend to come live with me by giving him.. oh wait, that’s totally not how love works, although I can see how some people might get confused.

Social interaction is needlessly complicated and tedious and awkward. If there was a friendship Sim on the market, no one would play it. We have enough trouble making true friends in real life as it is. Video games are for killing dudes, driving fast and picking up easy bed mates. And yet, the correlation between the way TFG calculates convo to boob ratios, and the way I got a husband in Skyrim, upwards of 20 wives and husbands in Fable, and kissed a pile of my classmates in Bully (remember that game? So underrated!) is totally completely by inserting kindness coins until kisses and husbands and ‘fade to black’ cut scenes fell out.

Are we teaching children that relationships are like any other market exchange by reinforcing that idea through gameplay? Probably not, but my article isn’t done, so let’s say MAYBE! Yes, it’s true that being nice to people will help you make friends, but randomly doing nice things for people, like running all over the realm and picking up spices when you don’t know them from Adam and being casually proposed to right after that happens is odd, not nice. If you think the world works like this, you may have boundary issues.

Real friendships come from really boring shit like listening to somebody whine about their mother, or cancer, or their mother’s cancer. Except it’s not boring when you’re real friends because you care about that person, and you want to know what’s up with them. Depending on the level of care, you might even want to know what they had for lunch today, or what they did at work,or what they really think of your new dress. And friendships are formed on more than just favors, there’s the issue of common interest, common experience, common personality. I once knew a girl who I agreed with on every important issue, or at least every issue I thought was important at that time in my life. And yet, she was a dud. Despite the fact that any biographer would consider us perfect for each other, we were not friends no matter what we did. It was an issue of personality. She had none (no, really she’s a fine girl, we just had nothing of actual importance in common, which is when I learned that the issues I thought were important were actually just window dressing.)

There’s really nothing you can say or do to make yourself a friend. Humans just sort of grow together like the malicious earth-destroying fungus we really are inside. The way we learn this process is by doing, by trying to be friends, by breaking up and starting over again. By learning boundaries: how to set them, how to respect them and why.

No game can teach that. But on the same token, no game can unteach that. I doubt that a lifetime of proper socialization can be wiped out in one, or three or a million different versions of the fire salts for marriage exchange that my Orc committed in Skyrim. The gaming community has already had this conversation a thousand times vis-a-vis gaming and murder, and since we’ve well established that Grand Theft Auto turned none of us into Miami Vice bad guys, or Russian immigrant mobsters – at least none of us who weren’t already going to be Miami Vice bad guys or Russian immigrant mobsters, we can probably bet that the same rules apply to monetizing relationships.

Are there people out there (let’s not pretend that sociopathy is an affliction that only targets men) who think that friends, are friend / sex / stuff machines that you put kindness coins into until friendship / sex / stuff falls out? Of course! Are video games making them worse? I don’t think so. More awkward? Maybe, but there’s a difference between being awkward and lacking a basic understanding of the use and nature of adult relationships and partnerships. And I think as gameplay gets more sophisticated, we’re going to see a move away from the missions for mammaries exchange. The friendship/relationship systems in Bioware games are definitely a step in the right direction. Yeah, the exchange has gone from pointless grocery gathering to picking the right response at the right time with no regard to your own moral compass (Garrus hates rules: “fuck it, we LIVE ON THE EDGE!” Ashley hates aliens: “Yeah, they skeeve me out too [totally hook up with Liara anyway.]”) So now we’re moving away from outright bartering and more towards a duplicitous chameleon situation, but it’s a step in the more complex direction, and I think the right one. Will game friends ever replace real friends, no that would be terrible. Will gaming sims ever really duplicate friendship? No that would be boring.