Emily asked for: The rise and fall of nyan cat.

To get into character for this blog, I drew a little nyancat of my own. 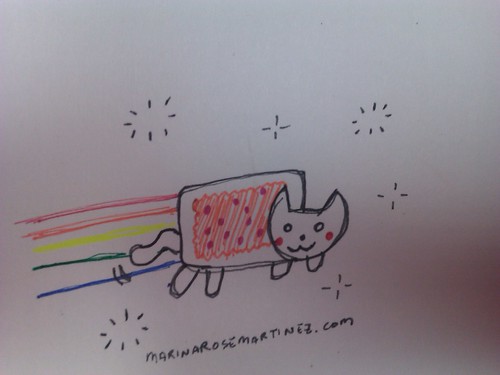 Why are the Nyancat’s back legs longer than it’s front legs? I guess shit gets weird when you live on a rainbow shooting through space.

Then I watched this, because… you know… space.

I guess since you’re all from the Internet, I don’t have to say that Nyancat started life as Pop Tart Cat when the 8-bit animation was first created by Chris Torres aka prguitarman, on April 2, 2011. Pop Tart Cat was Tumblr famous (Tumblamous) but didn’t become Nyancat until three days later when youtuber saraj00n posted Nyancat, which was Pop Tart Cat with a Japanese vocaloid song looping in the background, which, of course, looked like this:

According to Know Your Meme, the video got over a million views in it’s first two weeks. Because, damn it’s catchy. And adorable.

There was a short little period in June 2011 where everybody thought PRGuitarman had made a copyright claim against the video and had it taken down. So, of course he got death threats, which is uncool you guys, especially since he didn’t have anything to do with it and youtube put the video back up the next day.

I don’t know who I’m talking to in that last paragraph, I don’t really think my readers are the death threat type. But you never know. It’s always good to say that death threats are totally a bummer and nice people don’t make them (unless they really mean it-in that case it’s just honesty.)

Anyway, Nyancat hasn’t so much fallen as faded from our collective obsession like the crazy go-go social media high-jumper it was. On that note, I leave you with this.