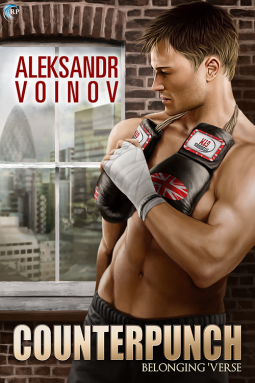 This is the second Voinov novel I’ve reviewed, as well as the second Belonging book, which you’ll recall was the controversial series set in an alternate universe where slavery was never abolished.

Like the first novel, Counterpunch brings up questions about the nature of love and relationships in a society where equality is illegal, but also examines a draconian criminal justice system that takes everything from a person, making redemption impossible. This book starts with a the question: what does a man have when he has nothing left to take?

When all else fails, when one can no longer emotionally manipulate one’s captors and owners in exchange for even the illusion of safety, what is there? What choice is left to someone who has no legal right to choose? Alternately, what happens to good men in a cruel system where there’s nothing but choice?

Brooklyn Marshall was a freeman, a cop and a husband until an accident on the job sent him to prison, and then into slavery. Now he’s the property of a conglomerate that buys and trains boxers, and he’s set to become the slave heavyweight champion of the world. But that doesn’t keep “the management” from hiring him out to the highest bidder to do whatever they want with him.

Little does he know that his next playing customer, Nathaniel Bishop, has other plans for his time… plans that are destined to crumble just like everything else Brooklyn ever loved.

Like Anchored, Counterpunch isn’t erotica so much as it’s a socio-political think-piece made possible by virtue of the fact that it’s ostensibly erotica. On the face of it, Anchored is a much more intellectual book. Counterpunch shies away from both the extreme violence that Anchored tackles head on, and the difficult realities of the universe in which it takes place. I don’t mean that one book is inherently better than the other, but Counterpunch is way less heavy, and therefore less difficult to read, but it didn’t get my brain going like Anchored did.