I already talked about my hatred for the institution of marriage in this angry tirade, but my views have evolved in the last couple of years, so I thought I’d write an update. A state of my contempt for the American family address, if you will.

At the time of that writing, I was getting a lot of pressure from family and friends to marry Ben, or at least for him to marry me. Most of the comments were well meaning, and now that I’ve had 2 years of trying to make innocuous small talk with other human beings, the weather, marriage, and family are kind of the only ‘safe’ topics. I can’t tell you how many times I’ve found myself asking, or nearly asking things about marriage and family, just to have something to talk about. The majority of people have family at the heart of their lives, it’s a real common ground. I find that, just as those busybody old ladies told me they would, my feelings about marriage have shifted over the years.

Have I had a massive change of heart, found myself pining after wedding dresses and china patterns? Fuck no, and of course not. However, I have become less defensive about my choice to reject marriage, perhaps in part because people have stopped fucking bothering me about it. One reason is because Ben and I are nearing 9 years of non-marital bliss. If we’re not married at this point, it’s become awkward to ask why. Also, big mouth that I am, most people know about my opinion on the subject. 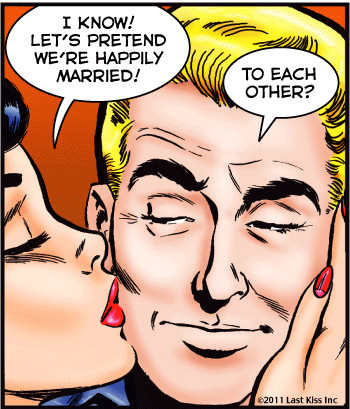 But every once in awhile someone will unwittingly ask me why I’m not interested in marriage, and usually they’ll lose interest as soon as they realize that I got a lot to say. Short version is this:

On the other hand, rather than being my main objections to the institution as a whole, these reasons have started to move onto the lists of reasons why I, personally, am not interested in marriage. To be honest, Ben and I have talked about the circumstances under which we would probably get married, and there are kind of a few of them.

Personally, I think the reasons we have for marriage illustrate how much of a joke the institution is. In fact, they do it better than the reasons I have against marriage. Anything marriage means on a personal or cultural level, I can have with Ben right now without the paperwork. If you ask me, we already have all the good ones. Although, along the lines of marriage accoutrements, I admit that I have recently become quite enamored of wedding rings. I kind of like the idea of unmarried people wearing them as a fashion statement. Fundamentalist religious nut-jobs and ‘traditionalists’ have made such a mockery of the whole thing with their fire and brimstone chicanery that their symbolism is basically a fad. Can we get skinny, stringy haired hipster chicks to stop wearing Native American headdresses and start wearing wedding rings? Because I think I’d quite enjoy that.

If you’re married, and you’re reading this, I’m not interested in offending anybody, or making anyone sad. If my tirade against government perks and special status for certain types of family units above others offended you, I’m sorry. I’m sure there will be another post about this in 2014 where I reveal that I have become even more of a pussy about this stuff. So look forward to that.

One Reply to “Don’t Worry, I Still Hate Stuff”