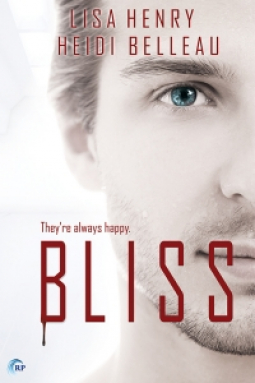 Thanks to NetGalley for the review copy. Bliss will be available for purchase Aug. 18, 2014.

Can I just say that I love Riptide Publishing? Good and bad, their books are always fun. You’re never in for a dull ride with Riptide.

Bliss deals with some heavy shit. Set in a combination paradise/dystopia, main character Rory James is a new immigrant to the city state of Beulah when he becomes the victim of what would be an everyday crime back home. But things are different in paradise. Very different, it turns out.

After Tate Patterson accidentally assaults Rory in an attempt to evade police, he is offered what looks like an incredible deal. Serve the man he hurt for seven years, live in a nice house in a nice neighborhood. Maybe learn a trade. It seems too good to be true because it is.

Turns out Beulah has a secret. And now that he’s been implanted with a top of the line behavior-modification chip, Tate isn’t telling anybody. Least of all the only person who might give a damn.

This is a dirty, sweet, even uplifting story of obedience, loyalty, and ultimately of love found in a hopeless place.

Anybody with a sub/dom kink is going to love this shit. Especially if you enjoy non-consent that turns into emphatic consent. Consent in this case, being used lightly. Mind control chip, and all.

Political thriller fans, especially if they like whistle blowers, will also be pleased. Bliss doesn’t rest on cheesecake. The writers put the characters in danger, in distress, and the consequences are serious.

What can I say except that I loved this book. This is erotica that goes out on a limb. It’s totally different from the usual run of snarky, non-communicative bro-ish assholes chest bumping at each other. Compared to what I read most of the time, this book was a breath of fresh air.

Erotica writers, out of all the genres have the most ability to take risks, and yet it is the genre where risks seem to be taken the least sometimes.

Sex is so universal. It can happen in literally any setting, between anybody for any reason. More authors should reach out, try new things. Be fucking adventurous!

Unlike hard line sci-fi and political books, Bliss does get sappy at places. But I wouldn’t hold that against it. Considering some of the shit that goes down, it’s the only way it avoids being a boner killer. Which it absolutely is not.

5 stars out of 5 for being the most interesting thing I’ve seen in months.