As you know, I don’t usually blog on the weekend, but I wanted to get this up, not just because I lost track of the days yesterday and teased a post for today (oh vacation, you so crazy), but also because I wanted to get this up ASAP for The Corvallis Sustainability Coalition, who put on the tour. So if you’re seeing this from the CSC’s site, welcome to my blog! And if you’re a regular reader of mine, check them out, they’re a great example site for anybody who’s into local activism.

I don’t know if Corvallis is more my scene, of if I just really genuinely like everybody here so I super wish it was my scene. I think those can be the same thing sometimes. Or at least the latter can evolve into the former. It’s sadly ironic that the very industry that would enable Ben and I to live in Corvallis or any place like it is the exact thing that we hate about all the places we currently live or could live.

One day, we’ll be awesome enough that employers will beg for us to work for them from the comfort of our snug, well gardened house in some adorable little college town while we eat farmers market food and bicycle everywhere we want to go.

I just google image searched “longing” and these two images were right next to each other. I thought they were one thing. 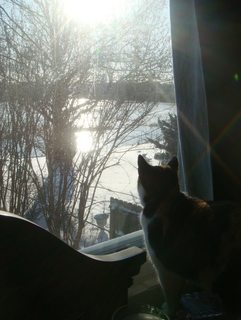 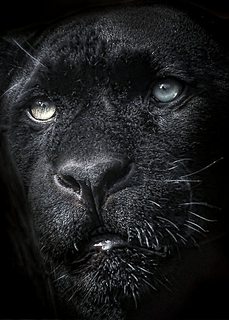 Anyway, I’ve lead you on long enough. Without further ado, here is my account of the Edible Front Yard Garden Tour.

By the time we got to the house, both Ben and I were tired (we’d slept in the car,) and sore (from walking around Portland) and we weren’t particularly interested in walking through the neighborhood on a garden tour. But everybody else was going, and I knew there was probably going to be something to blog about. So we put on appropriate footwear, and went to catch up with the tour, which had a fairly good sized crowd of about 40 people, all listening intently as a local gardener presented his front lawn.

We actually missed the first gardener, Chris McKim, but we got there just in time for Charles Lind, and educator and a renter, who should be the spokesperson for front yard gardening. He worked with his landlord and his neighbors to create a rich gardening community, emphasis on community. 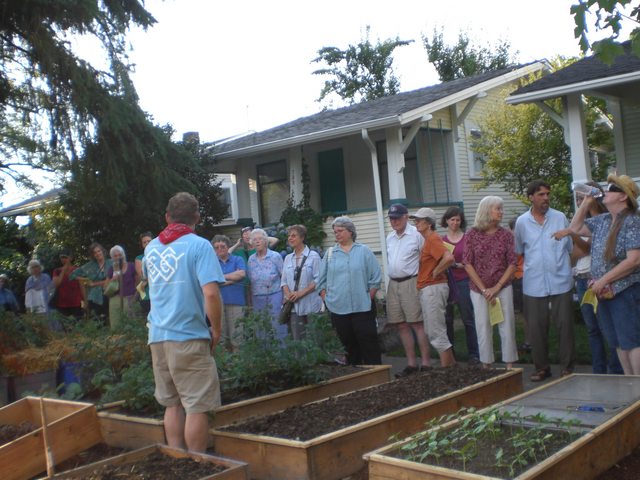 His corner house is surrounded on two sides by thick patches of vegetables that run over into his neighbor’s lots. He said that when he first started gardening, he offered vegetables to the people that live next to him, eventually working out arrangements where he would cultivate their lawns as well as his own, and in exchange they got fresh vegetables and herbs.

Because his landlord was nervous about retaining property value in the event that Charles moved out, he’s not able to plant the whole front lawn, and as a result, he’s been experimenting with container gardening. Using a method showcased in the book The Vegetable Gardener’s Container Bible: How to Grow a Bounty of Food in Pots, Tubs, and Other Containers, Charles showed the assembled crowd how he was able to plant potatoes, eggplant and peppers in old recycling bins. He said that the bin grown vegetables didn’t do as well as those in the ground, with the exception of potatoes, who really benefited from the constancy of the soil moisture that this style of bin gardening can provide. 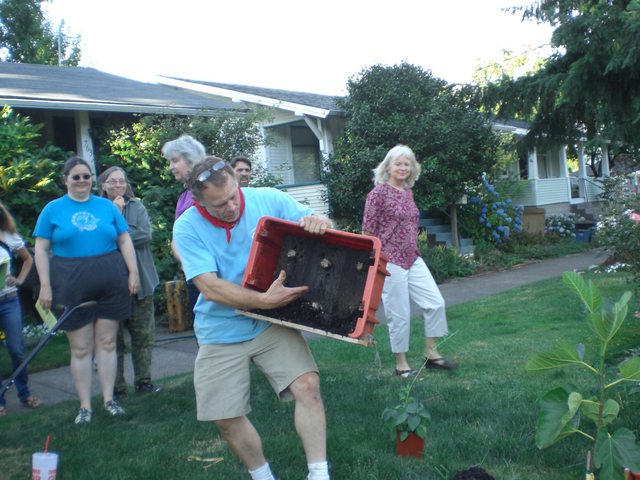 Charles says he will sometimes give whatever’s ripe to passers by while he’s working. “This was more of a community project than a gardening project” he told the crowd.

The next gardener was Maureen Swanson, who wasn’t able to be at the tour that day, so one of the organizers presented her garden for her, which is a memorial garden for a sister that passed away. From what I could tell of the crowd response, Maureen is a sort of matriarch for her cross street area. Her house is kitty corner to Charles’s, and many of the garden tour members knew her and had good things to say. Charles said “Maureen opened her garden to me. She’s great for someone of another generation to approach for gardening inspiration.” Another member of the crowd shouted “She gave me all my raspberries.” 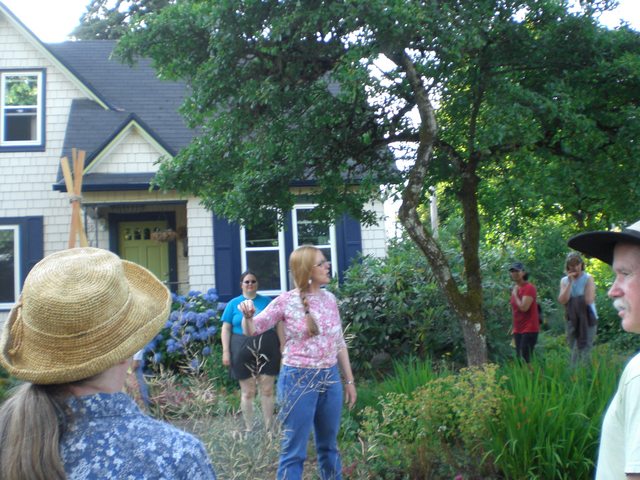 The tour organizer showcased Maureen’s wild arugula. The leaves are more narrow than domestic, and the taste is spicier, bolder and almost sage-like. It struck me as something that would add a really nice kick to a light summer salad, like a pear gorgonzola. 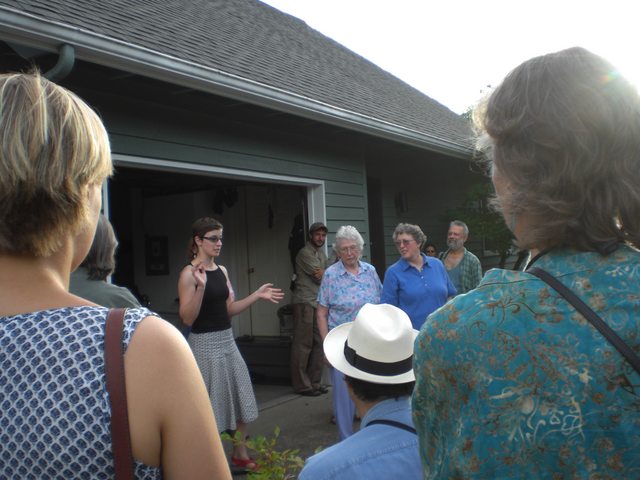 Cora tells the tour about her garden

The next gardener was Cora Borradaile. She and her partner Mike purchased the house the year before and they didn’t like the idea of maintaining the mass of inedible crop what was the front and back lawn. Having never gardened before, they bought the book Growing Vegetables West of the Cascades by Steve Solomon and followed his methods. This involved digging up their lawn by hand and letting it sit under cardboard for six months before beginning their garden.

Cora said that, while she was hand-digging the lawn, and during the six months of preparation, the house brought some attention from the neighbors. From the sound of it, they were all curious and supportive, especially when she started her first crop. “I am a completely new gardener, and so is Mike. I have to thank our neighbors, they’ve been really great” she told the tour. Neighbors gave her plants, and lent her tools and advice, even shared their composter with them until they built their own.

Because Cora and Mike don’t have a car, they felt that the driveway was wasted space, and put potted plants in it. Again, neighbors started donating pots, sometimes they came home to find a new pot left anonymously. When a landlord decided that their neighbor’s portable greenhouse was an eyesore, that also came to live in Cora and Mike’s driveway. The greenhouse Cora regards as community property, letting neighbors keep their plants in it over the winter along with her own. 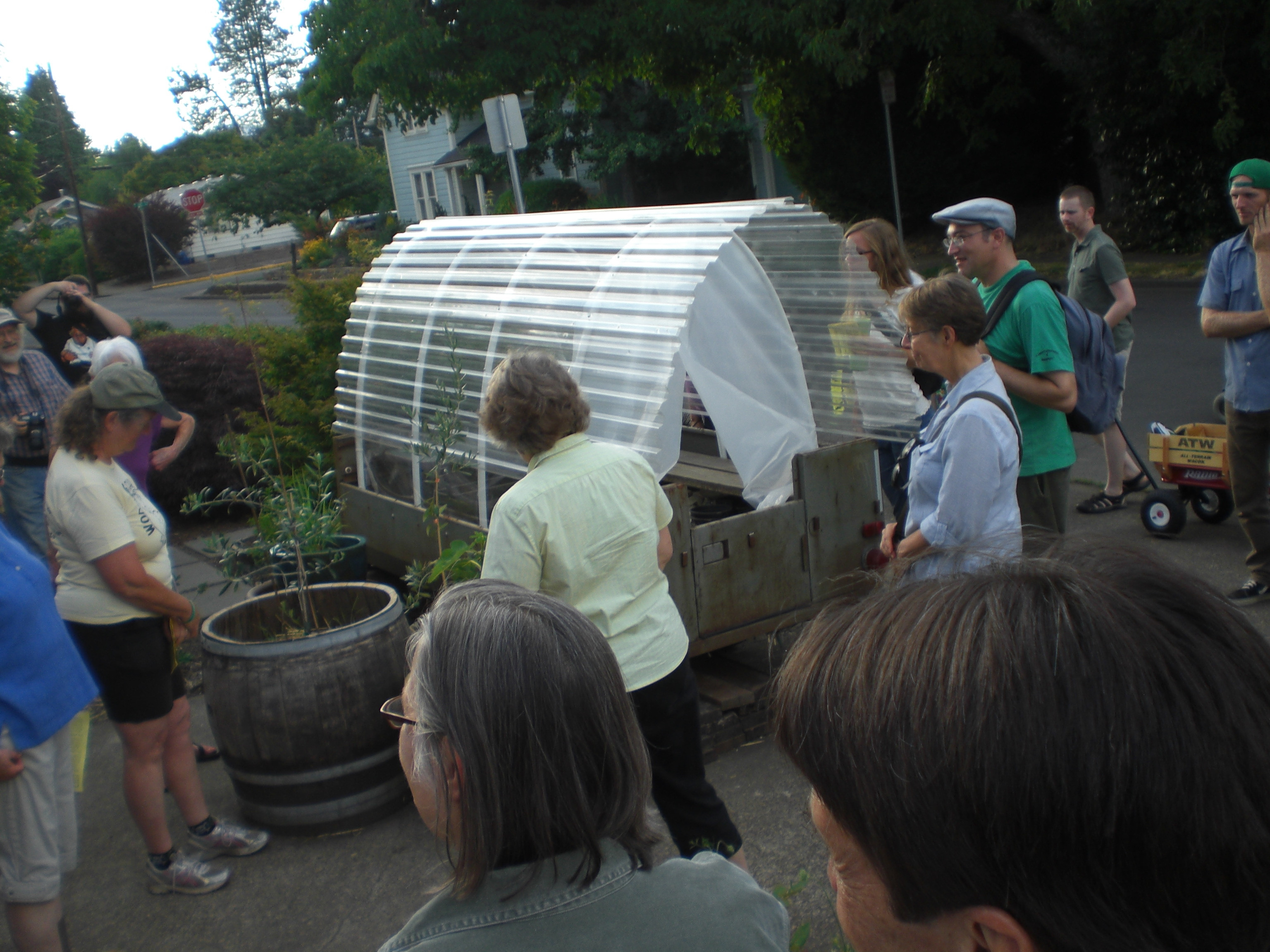 Cora points out which pots came from which neighbors

The next stop on our garden tour wasn’t exactly a front lawn. Corvallis High School’s horticulture class maintains a garden on campus, in conjunction with Oregon State University, with a grant from an organization whose name I didn’t catch. Last year, the students grew over 30 lbs of peas, which they featured at a tasting table inside the cafeteria, and put them in the salad bar. 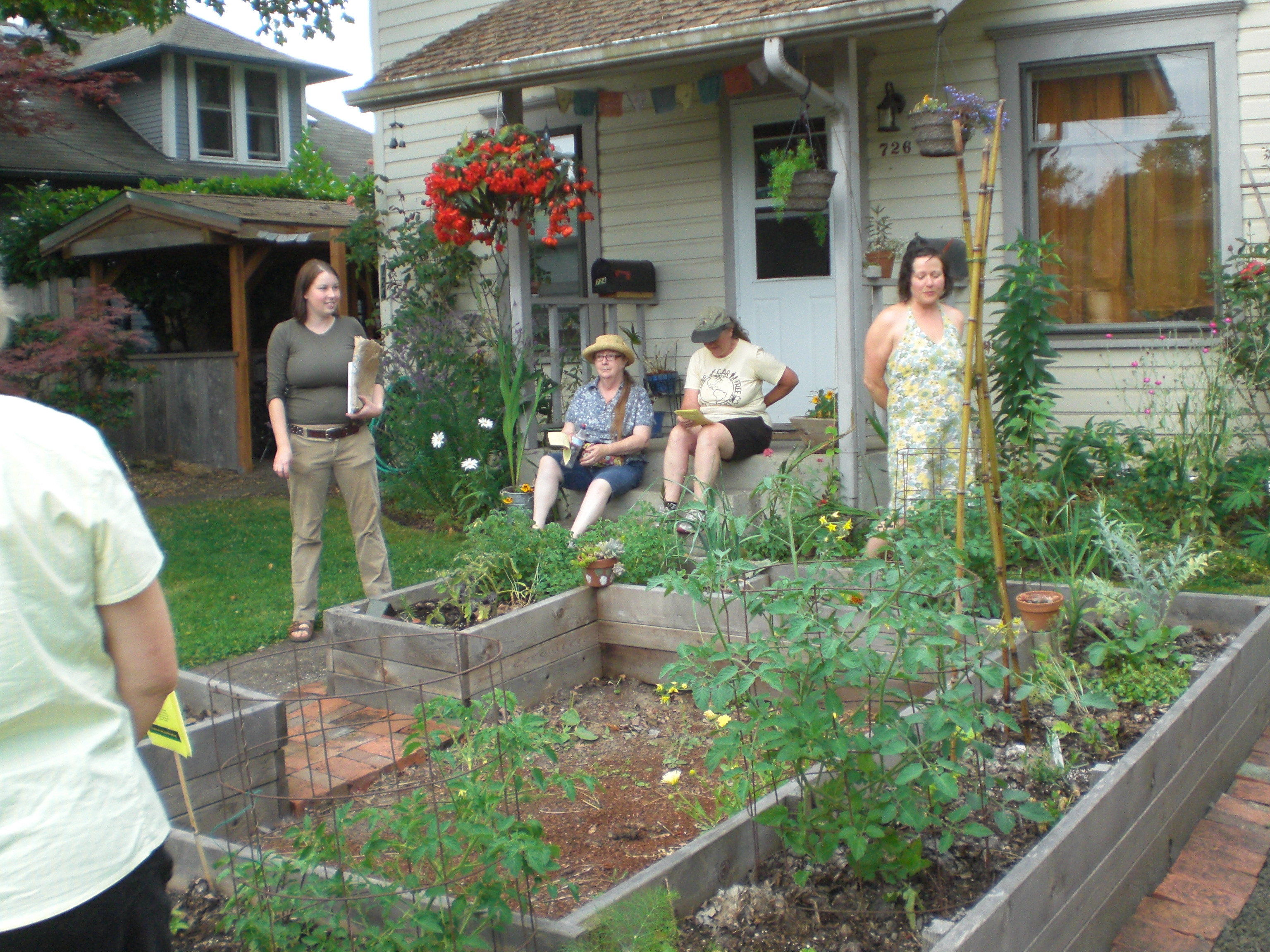 Michelle tells the crowd about her garden.

After that, we walked over to the house of one of the organizers, Leslie Melnyk and her housemate Michelle Wissel, who grow a garden with their neighbors in beds and with soil that were actually built and provided for by their landlord. “We share this as a communal space. It’s a great way to build community,” said Michelle.

At the end of the tour was Ben’s parents’ house. Ben’s dad Doug told the tour about how the city tried to cite him for his trellis being over four feet tall, but he negotiated a variance, which allowed them to keep the trellis, where he grows kiwi berries and grapes. Doug also told us about the different vegetables he grows and his method for keeping the drunk side of the college student foot traffic out of his patch, which is to strategically place flowers around the more sensitive veggies.

Since Doug’s garden is the only one I’ve actually eaten out of (aside from the arugula taste-test at Maureen’s), I have to say that it’s my favorite. Libby, Ben’s mom sometimes sends us pictures of the flowers and the bees and butterflies that she takes through the year. 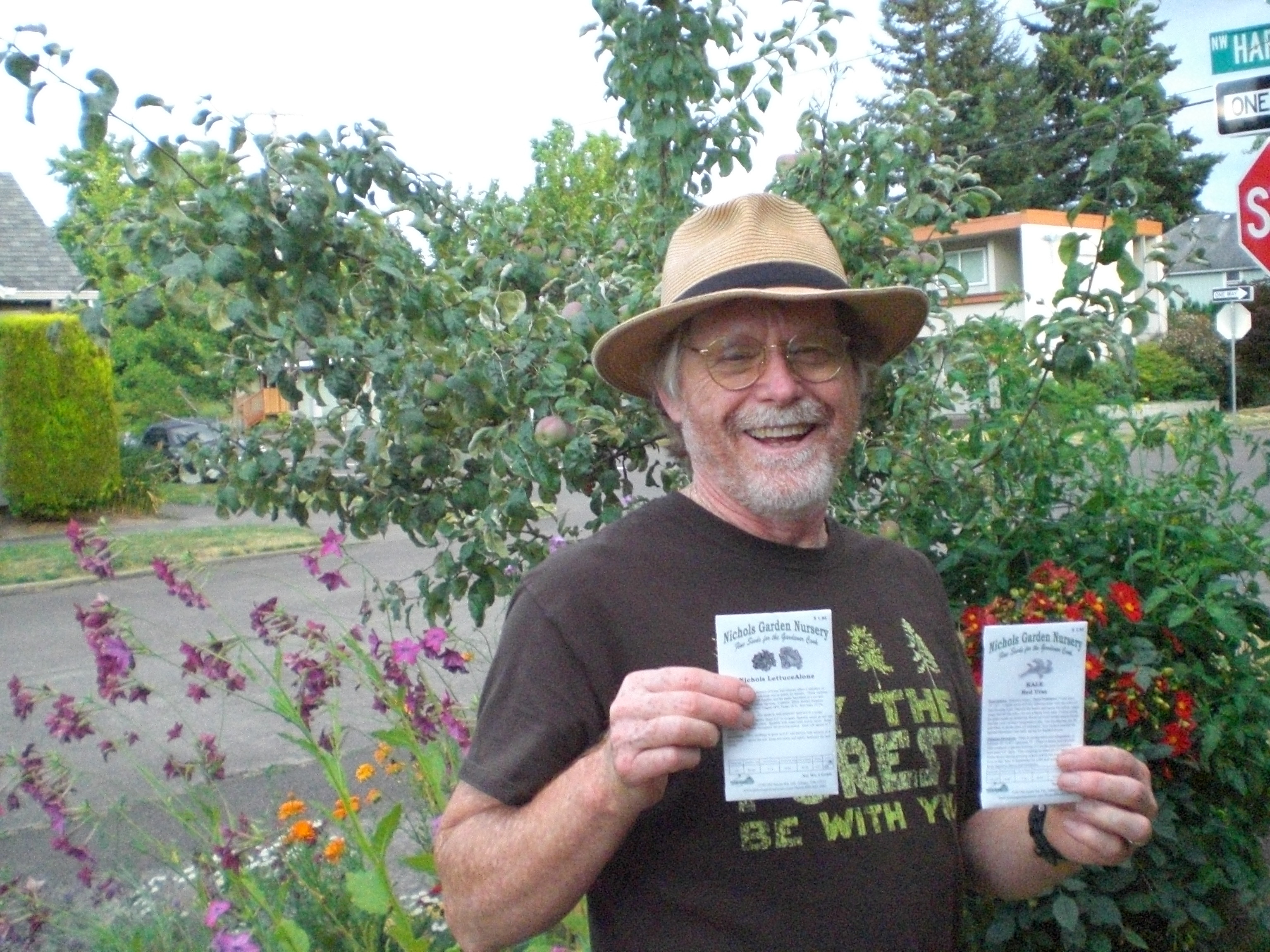 Doug shows off his seeds.

As a thank you for participating in the garden tour, the organizers gave the gardeners some seed packs.

Ben took some amazing pictures with his Nikon. I really suggest everyone look through the album I’ve embedded below. I’m glad we decided to come on the tour, I got a great sense of how neighborhoods can function, and how communities can grow when people support each other and learn from each other.

One Reply to “Corvallis Vacation – The Garden Tour”