This is another book I got for free or cheap in an Audible sale. Previously, I’d listened to Redshirts and loved it. My undergraduate thesis is on postmodern satire, the only way that book could have turned me on more is if it had dudes making out with each other on every other page.

Unfortunately, Fuzzy Nation did not inspire the same reaction. I hated the main character from the start. I was more interested in his ex-girlfriend as a character than I was in him until she decided to keep hanging out with him for no earthly reason. I honestly didn’t even care about the Fuzzys. Actually, that’s not entirely accurate. I alternately didn’t care, and totally knew that at some point they’d be faced with danger as a part of the plot, and that the dummy dumb main character would make the wrong decision, then make the right one at the last minute, after which we’re all supposed to think he’s amazing because he put a bunch of tiny adorable creatures in danger when his ego got in the way.

I already own a mirror. I don’t need to read about smug jerks who have no clue what they’re doing with their lives. That territory is pretty much covered.

We quit this 16 hour book with three and a half hours left to go. Ben and I listened to it for the majority of our 18 hour drive from Corvallis to Los Angeles this summer, and when we got home, we decided we’d use the time spent driving around town to finish it up, but we never did.

By the time we were getting ready to drive back to Corvallis this Christmas, Ben found Larry Correia’s twitter account, and decided against finishing the book. For the uninitiated, Correia is pretty far to the right. I read the entire Monster Hunter series before we started Hard Magic, and his politics are way more front and center in those books. The way I see it, someone couldn’t write the baddass-parades Correia makes with so much honesty without believing, to some extent, in the kind of world where Libertarianism would actually work.

Hard Magic isn’t unfinished because I’m getting the Woody Allen guilt-shakes whenever I reach for it. This isn’t an Orson Scott Card situation for me. I’m cool with other people’s politics as long as they’re not rapey or bogoty. I’ll probably finish it in 2014 now that I know Ben isn’t into listening to it with me.

P.S. I asked Ben to contribute here, since I’m attributing this book’s rejection to him, and he wrote “More specifically–while I don’t agree with his politics, that’s not really what bothers me. He just tends to come across as a smug, crowing asshole, which is something that irritates me regardless of politics–it’s the same reason I also think Richard Dawkins is a shit.”

ON THE DECAY OF THE ART OF LYING by Mark Twain

This book is free on Kindle, and I downloaded it in a moment of desperation. It was a dark time. I was reading anything I could get my hands on, and was running low on funds. If I had it to do over again, I would have stuck with the three dollar erotica. At least that stuff has the option to get exciting at some point.

This is a reprint of an essay Twain submitted to a contest that it did not win. I read the first 10 pages to my grandma and she fell asleep. If Mark Twain hadn’t written this, no one would know it ever existed. 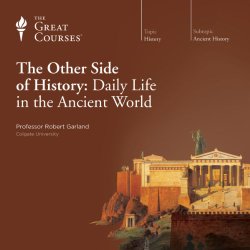 THE OTHER SIDE OF HISTORY by Robert Garland

This was another book we bought for the drive from Los Angeles to Corvallis this summer. We buy these road trip books to keep us awake on a 15-20 hour drive that starts at night, and ends the next evening. The Other Side of History might have been a good book, it’s probably full of interesting trivia that the kind of people who go to the kind of parties I go to would be very interested to hear. However, as intelligent and fascinating as Robert Garland may be, his lecture series is not a good choice to accompany an all night drive. This is a safety issue: you will fall asleep.