Lately I’ve been noticing that the Internet has a sort of waltz it does.

1. Somebody says or does something that someone or a group of someones finds to be offensive.
2. The offended party launches a vitriolic campaign against their enemy.
3. The enemy camp are themselves offended, and they retaliate in kind.

No one is safe, and it never seems to get anywhere past massively nasty name-calling that sometimes even ranges into death-threat territory. This happens to anyone from girl gamers to TV personalities. It is insane, exhausting, and I have no idea what to do about it. Especially when I feel like somebody is probably right, but everybody’s being too much of a fuck for rightness to even matter.

Most recently, I’ve been side-lining some portion of the RuPaul drama. Members of the trans community were upset that Ru used the officially-a-slur “she-male” in her show (step one, as shown above). A campaign was launched (step two), Ru apologized, and the offending word, game, and segment was removed from Drag Race. However, certain fans and other notable celebs felt slighted by this action (step three) and so they started a counter-campaign against the campaigners. 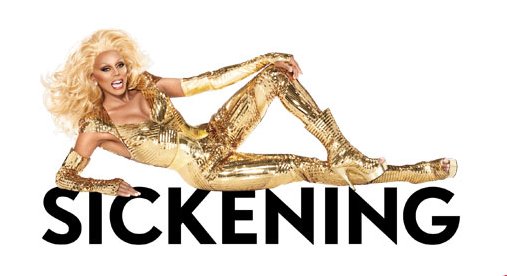 Accusations of being too sensitive, not sensitive enough, too old, too young, too educated, uneducated, experienced, inexperienced, and a man went flying across Twitter as well as several different notable blogs.

Skirmishes like this have gone on in regard to language for decades, but the Internet makes it faster, bigger, and meaner than ever before.

Shifting social landscapes mean the conditions activists fought for 20 years ago are a new and suddenly accessible reality today. Transpeople are no longer a theoretical element. They’re here, they may or may not be queer, depending on their own personal definition of how queerness sits in their hearts, and they’ve got fucking Twitter.

The RuPaul fight seemed to break down for/against she-mail(male) along some clear lines of old(er)/young, gay/trans (although not necessarily), and performer/activist.

But when a person is deeply wounded by a thing a TV character says, I have a hard time figuring out where my place is.

In the RuPaul fight, the logic is sound: Slurs that don’t belong to you shouldn’t be used by you.

The way we fight says more about who we are than what we fight. When everything devolves into mud slinging, it makes it difficult for anyone to claim a true victory.

I have a problem with using other people’s bad behavior as a justification for my own. I know I can be a shithead, but in general, I try to afford every other person the decency I would hope to receive from them were our positions reversed. But that’s never been the law of the land online, and that’s where most of these battles are being fought now days.

If we’re going to be taking real-life fights out of meatspace, we should at least bring some new rules in with them. The decisions made here now have real consequences, for better or for worse. I think we should be at least a little bit more polite to each other.

At the end of the day, we’re all of us fighting over the same parts of the same boat. Nobody wins this game.