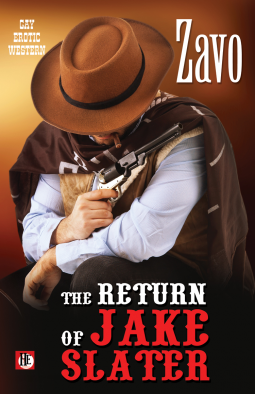 The Return of Jake Slater by Zavo

Thanks to NetGalley and Bold Strokes Books for the review copy. The Return of Jake Slater will be available Sept. 15, 2014

As the title implies, Jake Slater is back. Freshly recovered from the vicious attack that nearly ended his incredible, sex-soaked life, Jake is once again on a man hunt. Same man, different hunt.

Jake’s equally lusty lover Ben has been kidnapped by the evil Sheriff, and Jake is aching to reunite with his beloved so they can begin their lives together.

As before, something goes wrong, and Ben and Jake spend most of the book in deathly danger, neither sure if the other is dead or alive. Fucking throughout, of course. After all, certain peril is an excellent reason to fuck a stranger.

The Return grants the boys more agency than they seemed to have in book one, and all the better for it. And, since Ben and Jake were separated for most of the book, there was just a lot more plot going on, and I didn’t worry so much about them because I knew they’d be fine until they were reunited.

One weird issue I came across was at the end of the book. The first person present narration that had been switching from Ben to Jake sort of blended together in the last few chapters such that I couldn’t tell who was narrating. In fact, one section has the narrator saying “I” and acting on both Ben and Jake in the same paragraph. For example, “I replied to Jake… then I grabbed Ben’s hand.” it’s pretty confusing. Jake and Ben are this weird amalgam that acts as one entity. Which could have been a stylistic choice.

Altogether, another great one from Zavo. The man knows how to make light-hearted sex adventure stories come alive.