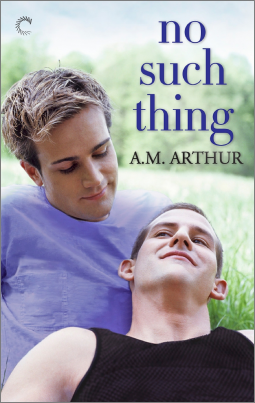 No Such Thing by A.M. Arthur

What can I say about No Such Thing? Except that it’s sweet as shit.

Earnest, intelligent college student Jaime Winters may have recovered from his heart transplant, but being a gay guy in a small town hasn’t exactly done his sex life any favors. That is until reformed bad boy Alessandro Silva walks into his sister’s bakery looking for a job and finds so much more than that. Back home to help his foster mother take care of his youngest foster siblings, Alé is unprepared for the combination of new love and old debt that’s about to hit the fan.

Arthur is serving bucolic haze of youth so hard in this book, and I fucking love it. Even though Alé is supposed to be at least slightly more hardened than Jaime, both boys are just adorable. Silva’s criminal past is more that of a stoner wash-out than anything really serious, and the haunting secret of his youth is one hundred percent a wrong place, wrong time situation. Winter’s almost childish naivety is sharpened by a razor wit and an obviously well turned hand at research. Together, these gamboling lambs will warm the hackles of your cynical, porn-stunted limbic system.

Despite, or more probably because of this overwhelming tenderness, the sex scenes are positively bursting with tension. Heat rolls off the characters, especially when they go into the big city (Wilmington) for some fun gay bar action and end up getting steamy in a foreplay foresome. There’s no actual group sex, but you won’t miss it. Especially if you’re as ADD as I can be when it comes to multiple partners in text-only format (in an IRL format too, but we’re not talking about high school right now).

I do wish A.M. had done better character motivation. It can be scattered. Jaime seems to be extremely well read in terms of sex and sexuality one moment, and then it’s like he grew up without cable the next. His shy impulsiveness in regard to communication can be explained away with his relative lack of social interaction. However, Alessandro’s not so much. Here’s a guy who “doesn’t do boyfriends” but who also gives up his job and his apartment in the city to come home and take care of a woman and her children for no other reason than that they need him; who thinks everybody leaves, but has the unwounded generosity of spirit that could only belong to a man who believes in love and kindness. Maybe I’m judging the character more harshly because I’ve been the no boyfriends, everybody leaves type (for as long as that lasted) and it didn’t keep a lot of room for compassionate patience with my fellow man. But I’ve only got myself as an example. Maybe there is such a thing as a pessimist so mellow and so yet so cynical that they’re totally cool with giving of themselves, despite the fact that, at the end of the day they know they’ll get left high and dry with nothing to show for it.

I also wish there was one major dramatic plot device instead of two. Jaime and Alessandro’s love me or leave me cha cha was in direct competition with the far more interesting, far more dramatic past-comes-back-to-bite-you trauma with Alé and the town jock/bully/rich and privileged douche bag. If I were the editor, I would have advised the author to tone down the emotional turmoil over the future of their relationship and dial up the mystery. Although I would also would have advised against making Jaime too much of a damsel in distress. It’s an easy place to put him in, but easy isn’t always the best course of action.

I don’t want to make it sound like the boys are fighting about their relationship or having the kind of irrational commitment fits so many less skilled romance writers will fall back on in lieu of naturally occurring plot, far from it. All their relationship turmoil is completely internal, and they manage to communicate with one another in a healthy way, while maintaining the appropriate amount of tension. This well-walked line is probably one of my favorite elements in No Such Thing. The characters have drama, they are not themselves drama. This is so hard for so many writers to accomplish, and it shines in this book.

2 Replies to “Adorable Small Town Boys in Love: Review of “No Such Thing” by A.M. Arthur”