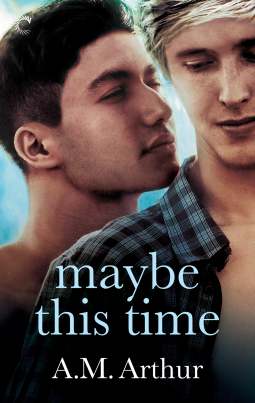 Maybe This Time by A.M. Arthur

I was already nearly a chapter into Maybe This Time before I realized it was the sequel to No Such Thing, which I reviewed here. Former main characters Alessandro and Jaime make several small appearances throughout this second book, but they’re largely background noise to the main romance between bar tender Donner and rich kid Ezra.

Finally starting to recover from the loss of his boyfriend over two years before, Donner has just started to come back to life. He’s relaunched the activist charity that they had previously done together, and he’s met a new guy who seems like someone he could rely on.

When it comes to recovery, Ezra seems to know the definition of the word, but he has no understanding of it. Still smarting eight years after some serious trauma, and living off the guilt payments his parents send him, he’s been joyfully unattached since his first serious boyfriend left him for someone “less complicated.” He drinks, he fucks, and he has a big screen TV. Basically, his life is perfect until Donner shows up to throw a wrench in the gears. The wrench of emotionally healthy monogamy.

The honest, clear communication skills I appreciated in No Such Thing are back in Maybe This Time, but I kind of get the feeling that someone close to the writer advised them to dial down the mystery and dial up the relationship drama (the exact opposite of what I’d have wanted) because there’s no real B plot here. Certainly not to the same extent as there was in the first book. So what we have is great communication, and a healthy reliance on internal turmoil to create drama, rather than the random yelling, mind-changing, manipulative bullshit character flaws so many lesser authors will use. But, we do have a few weird yelling and/or spastic emotional moments that result in Donner and Ezra not feeling as natural to me as Jaime and Ale did.

I can’t tell if A.M. is having a hard time writing about the somewhat broken protagonists because they themselves aren’t an abuse survivor, or if it’s because they are, and are afraid to really reach into that pain. Either way, the emotional process the characters went through feels a little like a puppet show. They hit a lot of the right marks, at the right times, but I had a hard time believing their emotional state. Unlike in No Such Thing, where the saccharine innocence of the characters was like the beating heart of their development.

That said, I still liked this book. I still want to know what happens to the rest of the series. I have a feeling I know who book three is about, and I am damn interested in the seeds that were planted. Hopefully by book three there will be some more development in terms of what trauma, recovery and relationship negotiation in the light of that might look like. But even if that doesn’t change at all, I’ll still be happy to read it.

At $3.03 for Prime members and $3.99 for regular Kindle users, this is a steal. There’s not much better at that price.