This is something I do every year for the holidays. I collect the funniest and most interesting tweets from around the Internet into Halls of Fame. I only use public tweets, but if you’re tweet is on here and you want me to take it down, just let me know at @marinaisgo and I’ll take it down no questions.

…to a budding Neighborhood Watch captain 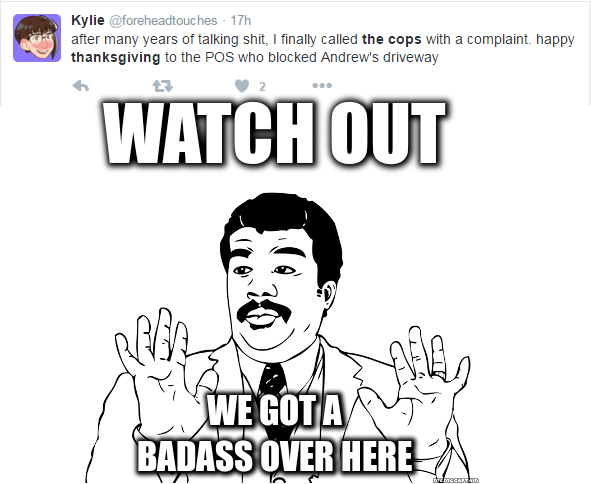 I woke up next to a beer can and a half eaten piece of pie. Thanksgiving was weird.

The cops knock on our door every thanksgiving that's how u know we live af ????????

How long is it going to be live though?

Aunt: "Why you always on your phone?" Me: "Why can't you keep a husband?" #ThanksgivingClapBack pic.twitter.com/5bqXRq3IkR

At Thanksgiving dinner dude asked for bathroon and shouted "I need Shit Tickets, I aint got no shame" ???????????? #thereIsAlwaysOne #shitTickets

aunt: your style is so…. different me: just like ya baby fathers #ThanksgivingClapBack pic.twitter.com/EqkV4CcXen

Thanksgiving just isn't the same without gramps! Miss you and the incest.

thanksgiving 2k15 ended in a break up, the cops called, and angry drunk spanish men fighting in the yard and hella tears. woooo !!

When you've known the chisme for 2 weeks but have to pretend like it's new to get más chisme. #Thanksgiving pic.twitter.com/D4sICKiKwV

“Oh, I see you two already know each other. You can sit together!”

Just got scolded. "No Grindr at the Thanksgiving table." #sorrynotsorry

Thanksgiving been bringing out the incest in everybody ????

My brother wears a tail these days and we'll, sure enough, it got caught under someone's chair leg at Thanksgiving dinner…

I’m going to need some detail on that tail wearing situation.

It wouldnt be thanksgiving w/o my uncle spanking me, my cousin tryin to eat my finger, and my uncle showin me his gfs nudes #Thanksgiving

Wow only on thanksgiving do I see an old ass man getting head on the highway ????

I have a feeling I know what old dude is thankful for.

old homie legit tried to fight me – "I'll tear your fucking head to off." like CHILL HOMIE ITS THANKSGIVING CHILL pic.twitter.com/q72UBdNWrB

While it is wrong to try and fight the children, I do have to wonder why y’all are standing so close together.

ALL BULLSHIT ASIDE… I pray my aunt that I hate comes to thanksgiving dinner I told her was gonna spit on her ass when I saw her ho ass.

Well, as long as you warned that ho.